Trish FitzSimons is a documentary film-maker, who also has research interests in documentary history, theory and policy and screen distribution. She convenes the Bachelor of Film and Screen Media Production.

With a first degree in social history, much of her media work has explored historical themes, including Snakes and Ladders: A Film about Women, Education and History (ABC, 1987), Another Way? (SBS, 1997), Channels of History: A Social History Exhibition (2002) and the book Australian Documentary: History, Practices, Genres (2011) published through Cambridge University Press. Currently she is immersed in a creative research project entitled Time and Tide: The Life of Norman Creek, and developing an exhibition on this theme with the Museum of Brisbane.

She has also written creative non-fiction in the area of water politics. (8/14) 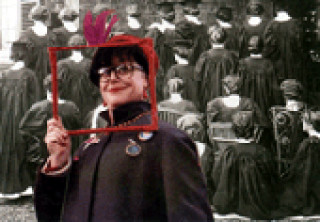 Like our own children’s game, Chutes and Ladders, the story of women’s education has always been one step forward, two steps back. In this creative documentary, a fictional woman detective acts as our guide to the history of women’s education in Australia, one surprisingly like our own. Featuring interviews with ten women (including Anne Summers,…