Honoring the year’s leading achievements in nonfiction released in theaters, TV, and major digital platforms, the Critics Choice Association has announced their nominees for the Sixth Annual Critics Choice Documentary Awards – and four WMM filmmakers are among them!

We offer our virtual applause to Liz, Jessica, Kristine, and Elizabeth! The full list of nominations can be found here. 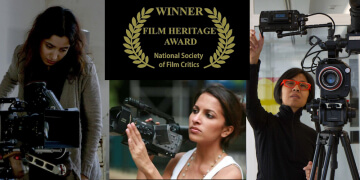