VARIETY  has announced their predictions for the 2021 Oscars. . . And the two newest releases from Women Make Movies — BELLY OF THE BEAST and CODED BIAS — are both  in contention for Best Documentary Feature! Also making the list are two films from WMM’s Production Assistance Program — THE FIGHT and MR. SOUL!.

BELLY OF THE BEAST, an exposé of human rights abuses in California’s women’s prisons, is directed by Peabody and Emmy Award-winning filmmaker Erika Cohn, named by VARIETY as one of 2017’s top documentary filmmakers to watch and featured in DOC NYC’s 2019 “40 Filmmakers Under 40.” The film premiered as the opening night film at the Human Rights Watch Film Festival, New York and is opening theatrically across the country beginning October 14.  CODED BIAS, which premiered at the 2020 Sundance Film Festival, is an investigation of racial and gender bias in facial-recognition software and algorithms underlying artificial intelligence programming. Directed by TED fellow and William J. Fulbright Scholar Shalini Kantayya, this film continues to make its rounds on the festival circuit to widespread acclaim. Both films are screening in the prestigious Valley of the Docs section at the Mill Valley Film Festival through October 18, 2020.

The contender list also includes films and filmmakers from WMM’s Production Assistance Program. As well as being a new addition to our catalog, CODED BIAS was produced with assistance from our PA Program. Other PA Program films to make the list: THE FIGHT, directed by Elyse Steinberg and Josh Kriegman and executive produced by Kerry Washington, goes inside the ACLU to battle the Trump administration’s assaults on civil liberties; and MR. SOUL!, directed by Melissa Haizlip, takes viewers behind the scenes of  Soul!, a U.S. public television arts and chat show that ran from 1968 and 1973 and offered an unfiltered, uncompromising celebration of Black literature, poetry, music, and politics at a time when few other outlets did.

We would also like to congratulate all of the PA Program alums who made the list with their new projects: Kirsten Johnson (DICK JOHNSON IS DEAD); Dawn Porter (JOHN LEWIS: GOOD TROUBLE and THE WAY I SEE IT); Ramona Diaz (A THOUSAND CUTS); Lana Wilson (MISS AMERICANA); and Sam Feder (DISCLOSURE). 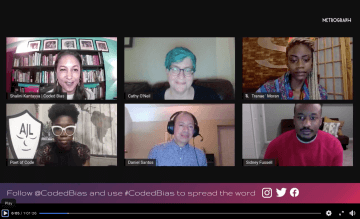