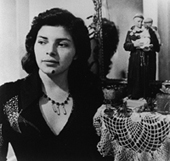 This dramatic story follows a young Nicaraguan immigrant, Irene, as she faces the challenges of life in the U.S. and re-evaluates her relationships with her boyfriend and family. AFTER THE EARTHQUAKE explores the immigrant experience, particularly the cultural, political and economic differences between life in North and Latin America. Written with Nina Serrano, Lourdes Portillo was nominated for an Academy Award for her next film, LAS MADRES DE LA PLAZA DE MAYO, produced with Susana Munoz.