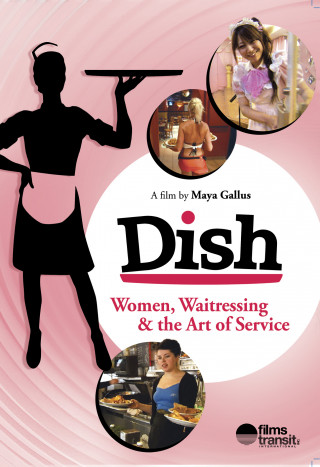 Women, Waitressing and the Art of Service

A film by Maya Gallus

Why do women bring your food at local diners, while in high-end establishments waiters are almost always men? DISH, by Maya Gallus, whose acclaimed
GIRL INSIDE (2007) won Canada’s Gemini Award for documentary directing, answers this question in a delicious, well-crafted deconstruction of waitressing and our collective fascination with an enduring popular icon. Digging beyond the obvious, Gallus, who waited tables in her teens, explores diverse dynamics between food servers and customers, as well as cultural biases and attitudes they convey. Her feminist analysis climbs the socio-economic ladder—from the bustling world of lower-end eateries, where women prevail as wait staff, to the more genteel male-dominated sphere of haute cuisine. Astute, amusing observations from women on the job in Ontario’s truck stop diners, Montreal’s topless"sexy restos," a Parisian super-luxe restaurant, and Tokyo’s fantasy "maid cafés", as well as male customers’ telling comments, disclose how gender, social standing, earning opportunities, and working conditions intersect in the food service industry.

“…a very successful film, conveying a lot of cross-cultural information while making a number of salient points of service, gender, and society.”

“Recommended. Offer[s] an interesting glimpse of social and economic factors within the restaurant world.”

"Filled with sharp observations about the social dynamics of customer relations and workplace solidarity, the film should be an excellent starting point for discussions of gendered and class-stratified labor."

"DISH delves into… gender, power, and the art of service… What’s revealed are the fantasies, desires, and prejudices projected onto women servers - including those of substitute wife, girlfriend, and personal servant."

"Dish is a highlight of Hot Docs. Beautifully shot with a clear line of sight to point and purpose, fast-paced with impressive attention to detail." —

Following 26-year-old Madison during a crucial three years of her transition, GIRL INSIDE is a beautiful film that tracks her emotional, intellectual and spiritual journey of self-discovery that is as important as – if not more than – the physical journey of hormones and surgery. Sharing the spotlight is Vivien, Madison’s glamorous 80-year-old grandmother, who has taken on the job of advising her on all things feminine. While Vivien's attempts to school Madison in old-fashioned codes of fashion and behavior are often hilarious, the juxtaposition of two vastly different experiences of womanhood, from very different generations, raises profound issues about the nature of gender, femininity and sexuality. Sometimes funny, sometimes painful, this heartwarming coming of age story is both an intimate portrait and a thoughtful exploration of what it means to be a woman. Recommended for courses in transgender and queer studies, gender studies, women’s studies and sociology.
Learn more

From the director of Bend it Like Beckham and Bride and Prejudice, PAIN, PASSION AND PROFIT is an inspirational look at women entrepreneurs through the eyes of the Body Shop founder, Anita Roddick, who has always maintained a strong commitment to the idea of “profits with principles.” Several women in Africa who have successfully developed small-scale business enterprises in their own communities provide a focus for Roddick to pose questions about how the role and status of women affects their enterprises and how those enterprises provide a means of community and economic development for women. PAIN, PASSION AND PROFIT gives an in-depth look at global feminism and economic development as well as a personal and spirited view of the connections between the experiences of women entrepreneurs in the First and Third Worlds.
Learn more

This inspiring documentary looks at nursing from the nurse's point of view, encouraging healthcare professionals to work together to change their poor working conditions and gain self-respect.
Learn more

SOME REAL HEAT explores the small and relatively new world of female firefighters in San Francisco and their upward climb to gain access to a male-dominated field. Armed with axes, chainsaws, muscle, heart and determination, six daring women demonstrate how they single-handedly turn gender roles upside down by putting their lives on the line everyday in one of the riskiest jobs around. As they passionately talk about the tools of the trade, overcoming their fears and helping others, they reveal the fascinating history of women fire fighters and the gender bias that barred them from officially entering the U.S. Fire Department until 1974. They also explain the important role women paramedics play in fire departments and the surprising number of medical emergencies that they attend to on a weekly basis – a number that far outweighs actually putting out fires. Uncovering the myth and reality of this dangerous profession, this inspiring piece intimately delves into the strength and character that distinguishes these women as true modern-day heroes.
Learn more

This wry and delightful found-footage film reveals a little-known chapter in labor history: the story of female telephone operators’ central place in the development of global communications. With an eye for the quirky and humorous, Caroline Martel assembles a dazzling array of clips – more than one hundred remarkable, rarely seen industrial, advertising and scientific management films produced in North America between 1903 and 1989 by Bell and Western Electric – and transforms them into a dreamlike montage documentary. As the first agents of globalization, this invisible army of women offered a way for companies to feminize and glamorize what was a highly stressful, underpaid and difficult job. Not merely "Voices with a Smile," telephone operators were shooting stars in a universe of infinite progress, test pilots for new management systems, and the face of shrewd public relations campaigns. As the work of operators has been eclipsed by the advent of automated systems, this artful piece of labor history also offers an insightful comment on women’s work, industrialization and communications technology. Refreshing and hilarious, THE PHANTOM OF THE OPERATOR provides a wry yet ethereal portrait of human society in the technocratic age.
Learn more

For Spaniards—and for the world—nothing has expressed their country’s traditionally rigid gender roles more powerfully than the image of the male matador. So sacred was the bullfighter’s masculinity to Spanish identity that a 1908 law barred women from the sport. Visually stunning and beautifully crafted, ELLA ES EL MATADOR (She is the Matador) reveals the surprising history of the women who made such a law necessary, and offers fascinating profiles of two female matadors currently in the arena, the acclaimed Maripaz Vega and neophyte Eva Florencia. These women are gender pioneers by necessity, confronting both bull and social code. But what emerges through this mesmerizing film is their truest motivation—a sheer passion for bullfighting, in the pursuit of a dream.
Learn more
Shopping Cart