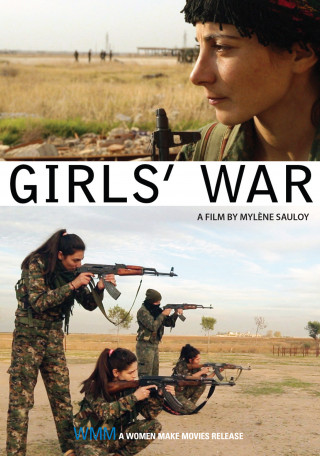 A film by Mylène Sauloy

As the forces of ISIS and Assad tear through villages and society in Syria and Northern Iraq, a group of brave and idealistic women are taking up arms against them—and winning inspiring victories. Members of “The Free Women’s Party” come from Paris, Turkish Kurdistan, and other parts of the world. Their dream: To create a Democratic Syria, and a society based on gender equality. Guns in hand, these women are carrying on a movement with roots that run 40 years deep in the Kurdish Workers’ Party (PKK) in Turkey. GIRL’S WAR honors the legacy of Sakine Cansiz, co-founder of the PKK who was assassinated in Paris in 2013, and reflects on the sacrifices made by all of the women in the movement, who have endured jail, rape, war, and persecution in their quest to liberate their lives and sisters from male dominance. With scenes of solidarity, strength, and love amongst these brave women soldiers, GIRL'S WAR is a surprising story of Middle Eastern feminism on the front lines.

"The liberating project of the Kurdish women’s movement, the utopian dream of an egalitarian, democratic, multi-faith and multiethnic society, its ideological corpus and its history... All revealed by Girls’ War"

"[Girls’ War] is evidently engaging, and it presents to us an escapade about which we cannot remain indifferent at a time when the world painfully seeks to reinvent justice."

"[Girls’ War] seeks to place the combat [of "The Free Women’s Party"] in the larger context of women’s conditions in the Middle East. That’s how it pays beautiful homage to these women’s heroism."

Mylène Sauloy studied architecture and then obtained a Masters in Social Sciences at the Sorbonne. She is founder and project leader of "Marcho Doryila - cultural solidarity with Chechnya, Caucasus and Latin America". She is director and camerawoman and has worked for numerous French TV channels such as ARTE, Canal Plus, France 3, collaborating on many different reports and documentaries.

A coming of age story in the wake of the Arab Spring, NADA’S REVOLUTION is an intimate portrait of a young, post-revolution Egyptian woman fighting for her freedom and independence in a society caught between old traditions and modernization. Amidst the political turmoil that has paralyzed Egypt for almost three years, we follow Nada’s struggle to establish herself as an independent woman and theater professional as she sets out to make her old dream come true: to work with children’s theater. When the revolution broke out in 2011, Nada–like many other young women–was full of energy and hope. But in the aftermath of the revolution and when the election of President Morsi further pushes the country into political turmoil, the situation appears hopeless. Nada is confronted with the question of how to stay true to her own dreams, while conservative ideas about gender roles and women’s freedom are hard to change. Nada’s fight is not over.
Learn more

The Tunisian Revolution sparked the Arab Spring. But revolution was the easy part—as two women learned on the journey from protest to functioning government. Emna Ben Jemaa and Jawhara Ettis represent opposite sides of their country’s politics: One is a well-known journalist in the city, fighting for free speech. The other is a strict Islamist from a rural town, elected to help draft the new constitution. Despite their differences, both face the threat of extremists hijacking their fragile political process, and both Emna and Jawhara have to make difficult choices to balance their public political roles with their domestic environment. The film is a gripping and surprising perspective on the clash between Islam and secularism, and the political role of women in the Arab world. Offering an insightful portrait of the messy work of democracy, A REVOLUTION IN FOUR SEASONS is especially poignant in this global era of divided politics.
Learn more

A Portrait of Three Women in Afghanistan, Syria and Iraq Leading the Fight for Gender Equality
Learn more
Shopping Cart