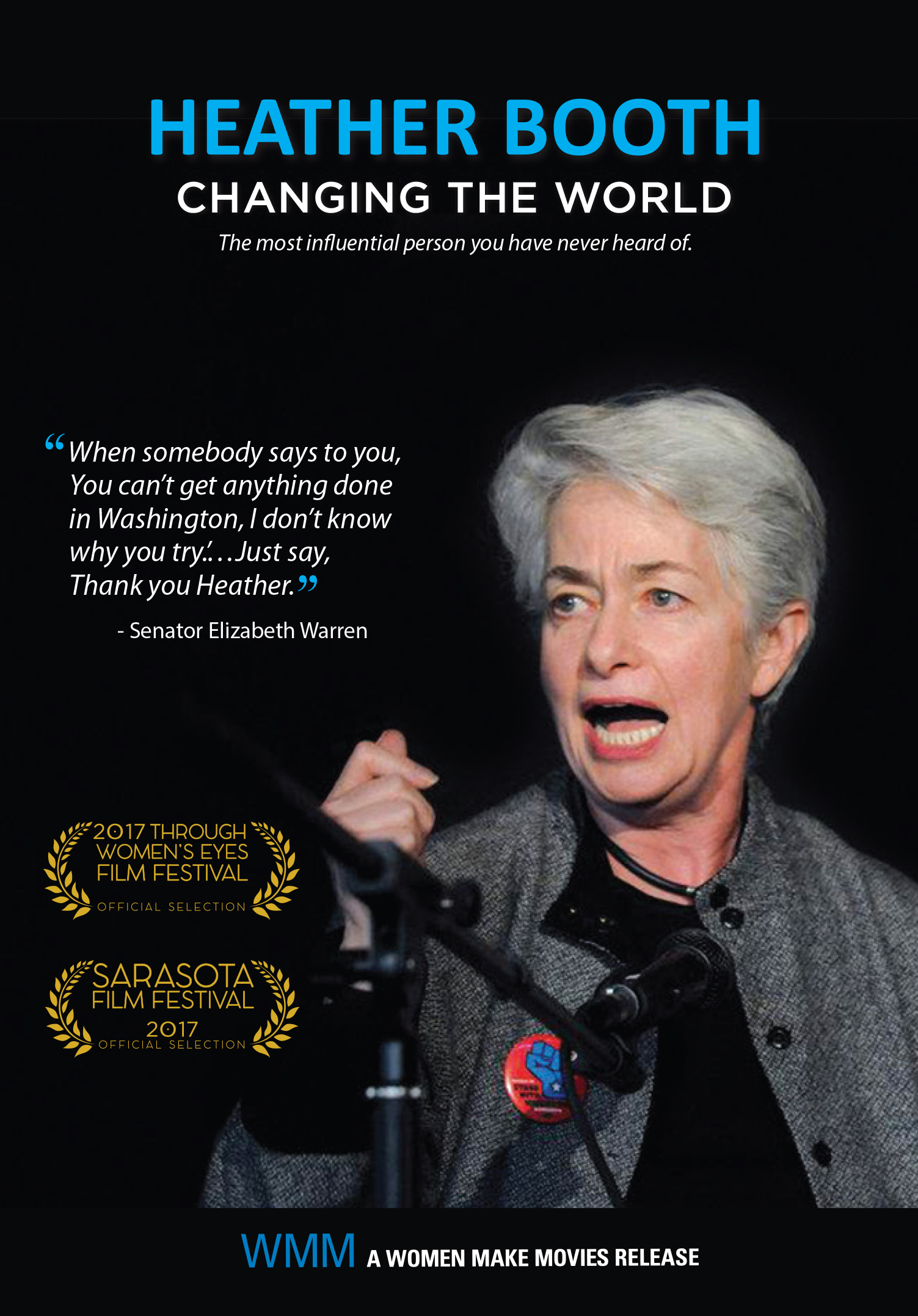 A film by Lilly Rivlin

Renowned organizer and activist Heather Booth began her remarkable career at the height of the Civil Rights movement. Through her life and work, this inspiring film explores many of the pivotal moments in progressive movements that altered our history over the last fifty years, from her involvement with Fannie Lou Hamer and the Freedom Summer Project, to her founding of the JANE Underground in 1964, to her personal relationships with respected leaders such as Julian Bond and Senator Elizabeth Warren. Featuring interviews from close friends, clients, political colleagues and current Midwest Academy students, HEATHER BOOTH: CHANGING THE WORLD explores Heather’s legacy in progressive politics and organizing.

At a time when many are wondering how to make their voices heard, when civil and women's rights are under attack, Lilly Rivlin’s acclaimed documentary is an empowering look at how social change happens.

"Heather Booth has had a lifetime commitment to social justice organizing which she does superbly. If there is a difficult job to do, call Heather!"

"When somebody says to you, You can’t get anything done in Washington, I don’t know why you try’…Just say, Thank you Heather."

"The movie's a call to action…watching and listening will give you much needed courage… There is not an uninteresting minute in all of the 60."

"Booth, 71, is one of the nation’s most influential organizers for progressive causes. Inside almost every liberal drive over the past five decades - for fair pay, equal justice, abortion rights, workers’ rights, voter rights, civil rights, immigration rights, child care - you will find Booth."

"Using on-camera interviews, archival footage, and photographs—filmmaker Lilly Rivlin shows how the eminent community organizer and activist, now in her 70s, participated in nearly every major progressive movement in America from the mid-60s onward."

"Booth is very much a real deal fighter for social justice. Viewers will leave the film even more inspired to work for change."

"If you've never heard of Heather Booth, you are not alone. But once you see this film, you'll never forget her name."

"Is exactly the kind of sophisticated and inspiring story we need in these troubling times. Go see this film…a remarkable documentary."

Award-winning filmmaker, writer and political activist Lilly Rivlin lives in New York City. Rivlin was born in Jerusalem and immigrated to the United States with her family in 1945. She did her graduate degree in Political Science at U of C, Berkeley. Before focusing on documentaries, she was a journalist, and foundation consultant on the Middle East and women.

Most recently Rivlin was selected as the 2013-14 recipient of the annual Miller Distinguished Jewish Woman Filmmaker Award.The ‘personal is political’ is expressed in the documentaries she produced, directed and wrote: her latest is ESTHER BRONER: A WEAVE OF WOMEN,( (2013) and before that the award winning film, GRACE PALEY: COLLECTED SHORTS, (2010); CAN YOU HEAR ME? ISRAELI AND PALESTINIAN WOMEN FIGHT FOR PEACE (2006); GIMME A KISS (2000); MIRIAM'S DAUGHTERS NOW, aired on PBS and Israel TV (1986); THE TRIBE, CUNY TV (1983).

Ms. Rivlin's articles were published in Newsweek, MS Magazine, The Washington Post, Lear’s and US Magazine. Other publications include Welcome to Israel, with Gila Gevirtz, (2000); Which Lilith? : Feminist Writers Recreate the World's First Woman, co-edited with Enid Dame and Henny Wenkart (1998); concept and photographs for When Will the Fighting Stop? A Child’s View of Jerusalem (1990).
(3/14)

This fascinating political look at a little-known chapter in women's history tells the story of "Jane", the Chicago-based women's health group who performed nearly 12,000 safe illegal abortions between 1969 and 1973 with no formal medical training.
Learn more

This compelling documentary takes an in-depth look at the 1972 presidential campaign of Shirley Chisholm, the first black woman elected to Congress and the first to seek nomination for the highest office in the land.
Learn more

Antonia Pantoja (1922-2002), visionary Puerto Rican educator, activist, and early proponent of bilingual education, inspired multiple generations of young people and fought for many of the rights that people take for granted today. Unbowed by obstacles she encountered as a black, Puerto Rican woman, she founded ASPIRA to empower Puerto Rican youth, and created other enduring leadership and advocacy organizations in New York and California, across the United States, and in Puerto Rico. Recognized for her achievements in 1996, Dr. Pantoja was awarded the prestigious Presidential Medal of Freedom, the highest honor bestowed upon civilians in the US. In this important documentary, Pantoja’s compelling story is told through never-before-seen home movies, archival footage, and personal passionate testimony from Pantoja herself and some of her countless protégés, as well as her life partner. Highlighting major landmarks in Pantoja’s biography and long, productive career, the film shows her profound commitment to transforming society, her pivotal role in the Puerto Rican community’s fight to combat racism and discrimination, and her pioneering work in securing a bilingual voice in the US. An eloquent tribute to a remarkable woman, the film sheds new light on the Puerto Rican community’s far-reaching triumphs.
Learn more

COUNCILWOMAN follows the first term of Rhode Island Councilwoman Carmen Castillo as she balances her day job as a hotel housekeeper with the demands of public office.
Learn more
Shopping Cart