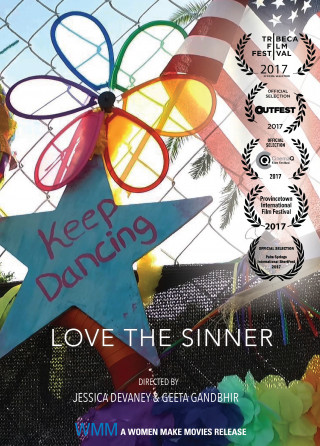 LOVE THE SINNER is a personal documentary exploring the connection between Christianity and homophobia in the wake of the 2016 shooting at Pulse nightclub in Orlando.

LOVE THE SINNER is a personal documentary exploring the connection between Christianity and homophobia in the wake of the 2016 shooting at Pulse nightclub in Orlando.

Queer filmmaker Jessica Devaney grew up deeply immersed in Evangelical Christianity in Florida. After breaking with her youth as a nationally recognized activist and leader among conservative Evangelicals, Jessica left Florida and didn’t look back. She built a life that took her as far away from home as possible. Over time, her daily life became a progressive echo chamber.

The mass shooting at Pulse was a wakeup call. By avoiding hard conversations with church leadership, had she missed opportunities to challenge homophobia?

LOVE THE SINNER probes our responsibility to face bias in our communities and push for dignity and equality for all.

"By capturing the milieu of small-town, mega-church Florida and questioning the connection between faith-based homophobia and violence, [the film] brings forth a compelling dialectic that challenges what it means to really love thy neighbor as thyself."

"A welcome addition to the broader cultural conversation."

"This film is short…. but it packs the punch of a full-length feature."

Geeta Gandbhir has been nominated for three Emmy Awards and has won two. As editor, films have been nominated twice for the Academy Award, winning once, and have also won three Peabody Awards. Most recently, a feature documentary she produced with Perri Peltz and directed with Academy Award Winning director Sharmeen Obaid-Chinoy, A Journey of A Thousand Miles: Peacekeepers premiered at the 2015 Toronto International Film Festival. She is currently co-directing and co-producing a Conversation series on race with The New York Times Op-Docs, and she co-directed and edited the film, Remembering the Artist, Robert De Niro, Sr. with Perri Peltz for HBO. Additional notable works as an editor include, Mr. Dynamite: The Rise of James Brown, Whoopi Goldberg Presents Moms Mabley for HBO, which was nominated for an Emmy, When the Levees Broke, By the People: The Election of Barack Obama, Music By Prudence, Budrus, If God Is Willing and Da Creek Don't Rise, and God is the Bigger Elvis which was nominated for the 2012 Academy Awards. Her film, Which Way is the Front Line From Here? With author and Academy Award nominated director Sebastian Junger was nominated for the 2014 News and Doc Emmys. (08/17)

REBEL DYKES is a riotous documentary about the explosion that happened when punk met feminism, told through the lives of a gang of lesbians in post-punk, 1980s London.
Learn more

The Revival: Women and the Word

THE REVIVAL: WOMEN AND THE WORD chronicles the US tour of a group of Black lesbian poets and musicians, who become present-day stewards of a historical movement to build community among queer women of color. Their journey to strengthen their community is enriched by insightful interviews with leading Black feminist thinkers and historians, including Dr. Alexis Pauline Gumbs, Nikki Finney, and Alexis Deveaux. As the group tours the country, the film reveals their aspirations and triumphs, as well as the unique identity challenges they face encompassing gender, race, and sexuality. This is a rarely seen look into a special sisterhood - one where marginalized voices are both heard and respected.
Learn more

Julie Wyman's compelling documentary chronicles Theo's transformation from a woman to a man over the course of six years. The film successfully captures Theo's physiological and psychological changes during the process, as well as their effects on his lesbian lover and community of close friends. Taking full advantage of the unlimited access she received into an extraordinarily personal process, Wyman carefully composes a moving story about gender identity, relationships, and how even things that seem permanent can change. "A BOY NAMED SUE is one of the best videos to date on female-to-male trans[gender] experience. Wyman spent six years taping Sue's transformation into Theo and then organized a huge archive of material into a moving, informative and smart rendering of what a difference sex reassignment surgeries can make not only to the transsexual himself but also to all those in his immediate circle. Theo is a great subject and Wyman is a talented and imaginative documentarian. If you are looking for a sensitive and sophisticated representation of transsexual experience, look no further." Judith Halberstam, University of California, San Diego
Learn more

In Sickness and In Health

A deeply affecting film by newcomer Pilar Prassas and edited by Peter Heacock, In Sickness and In Health cuts through abstract ideologies, politics, and legalities to the human heart of the same-sex marriage debate in this amazing story of love, hope, and courage. In 2002, filmmaker Pilar Prassas began following seven couples in their effort to legalize same-sex marriage in the state of New Jersey. Two years into filming, however, plaintiff Marilyn Maneely, mother of five, was diagnosed with the incurable, terminal disease Amyotrophic Lateral Sclerosis, also known as Lou Gehrig’s Disease. On the day Marilyn passed away, her life partner of 14 years, Diane Marini, was not even allowed to sign her death certificate. In traditional marriage vows, “‘til death do us part” is the phrase that follows “in sickness and in health,” but to many gay and lesbian Americans, saying these words and enjoying their subsequent rights is not an option. With a tender touch, Prassas delicately balances tragedy and triumph in this film about the civil rights issue of our time—the fight to marry, and care for, the ones we love, in sickness and in health.
Learn more
Shopping Cart