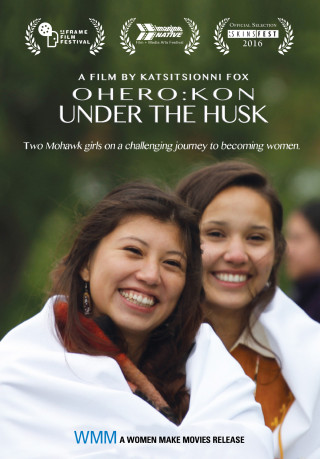 A film by Katsitsionni Fox (Mohawk)

OHERO:KON - UNDER THE HUSK follows two Mohawk girls on their journey to become Mohawk women.

OHERO:KON - UNDER THE HUSK follows two Mohawk girls on their journey to become Mohawk women. Friends since childhood, Kaienkwinehtha and Kasennakohe are members of the traditional community of Akwesasne on the U.S./Canada border. Together, they undertake a four-year rite of passage for adolescents, called Oheró:kon, or “under the husk.” The ceremony had been nearly extinct, a casualty of colonialism and intergenerational trauma; revived in the past decade by two traditional leaders, it has since flourished. Filmmaker Katsitsionni Fox has served as a mentor, or “auntie,” to many youth going through the passage rites. In UNDER THE HUSK, Fox shares two girls’ journey through adolescence, as they rise to the tasks of Oheró:kon, learning traditional practices such as basket making and survival skills as well as contemporary teachings about sexual health and drug and alcohol prevention. UNDER THE HUSK is a personal story of a traditional practice challenging young girls spiritually, mentally, emotionally, and physically, shaping the women they become.

"The film is a gift to non-natives, giving us a view into a rich and sustainable culture which values girls and women."

"In an age where traditions are increasingly sacrificed for contemporary life, UNDER THE HUSK defiantly preserves the sacred."

"Empowering! Every women I've spoken to over the age of 25 has echoed the sentiment, "I wish we had something like that when i was growing up. Exponential healing for the whole family."

Katsitsionni has been making films since 2003 in the Mohawk Territory of Akwesasne, where she resides. Her film “Ohero:kon - Under the Husk,” following the journey of two Mohawk girls as they take part in their traditional passage rites to becoming Mohawk Women, received funding from Vision Maker Media and was broadcast on many PBS stations. Katsitsionni received the Jane Glassco Award for Emerging Filmmaker at the imagineNATIVE Film Festival in 2016 as well as the Achievement in Documentary Filmmaking Award at LA Skins Fest in 2016. She produced a series of twelve short segments for REMATRIATION, a Native American women's online, multi-media magazine, that is focused on healing and empowerment of Native women through the sharing of their stories and successes.  Her latest documentary, WITHOUT A WHISPER, is an untold story of how Native American women helped to inspire the struggle of American women’s suffrage movement in the United States. (09/20)

Daughter of a Lost Bird

Kendra Mylnechuk Potter, a Native woman adopted into a white family, reconnects with her Native identity and begins to view herself as a living legacy of U.S. assimilationist policy.
Learn more

WITHOUT A WHISPER - KONNON:KWE is the untold story of the profound influence of Indigenous women on the beginning of the women’s rights movement in the United States.
Learn more

There is a group of people in the world today who are more persecuted than anyone else, but they are not political or religious activists. They are girls. Being born a girl means you are more likely to be subjected to violence, disease, poverty and disadvantage than any other group on Earth. In I AM A GIRL, we meet 14-year-old Kimsey from Cambodia, forced to sell her virginity at 12; Aziza from Afghanistan, who will be shot if she goes to school; Breani, a teen living in a ghetto of NYC and dreaming of stardom; Katie from Australia, who is recovering from a suicide attempt; Habiba from Cameroon, betrothed to a man 20 years her senior; and Manu from Papua New Guinea, about to become a mother at 14 following her first sexual encounter. As they come of age in the way their culture dictates, we see remarkable heart-warming stories of resilience, bravery and humor. Nominated for four Australian Academy Awards including Best Documentary and Best Director, I AM A GIRL is an inspirational feature length documentary that paints a clear picture of the reality of what it means to be a girl in the 21st century. I AM A GIRL provides practical and ready-to-use resources for educators to address human rights and social justice issues affecting girls in the classroom. Girl Be Heard Education Guides for I AM A GIRL are three units of 25 total lesson plans aligned with US Common Core Curriculum (grades 9-12), to provide a practical and ready-to-use resource for teachers to address human rights and social justice issues affecting girls around the world. Girl Be Heard Education Guides for I AM A GIRL help teachers bring important human rights topics and a future of gender equality to the classroom. For more information, go to: http://girlbeheard.org/i-am-a-girl-education-guides.
Learn more