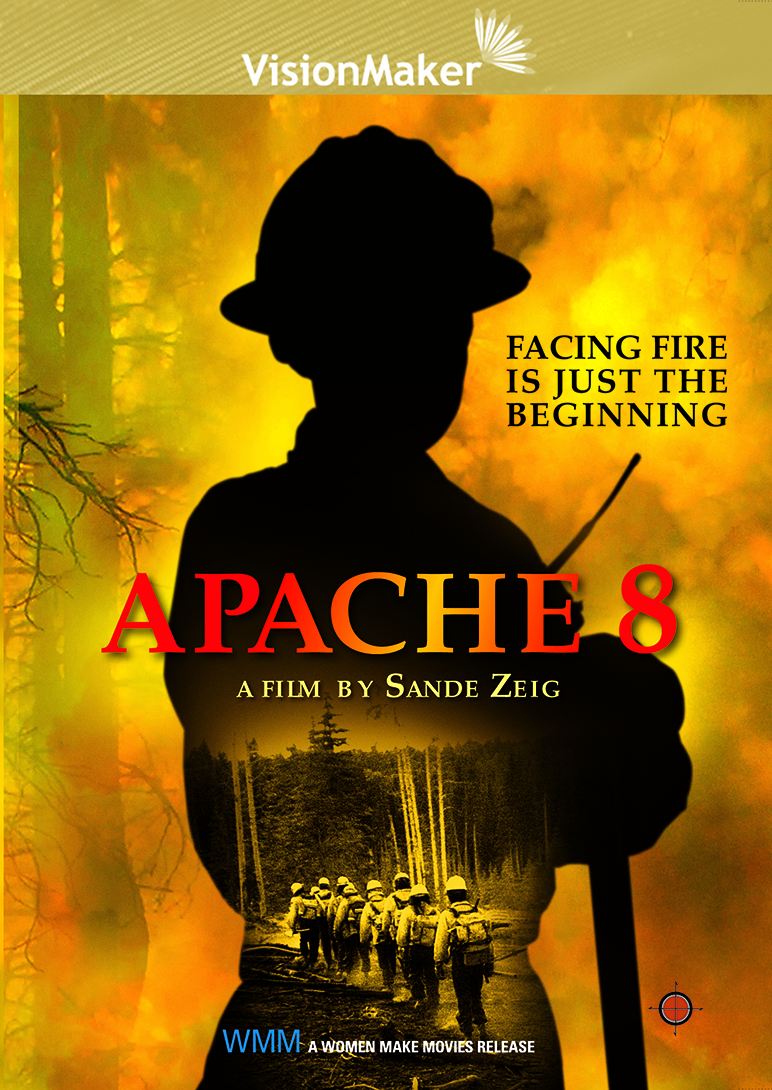 A film by Sande Zeig

For 30 years, the all-female Apache 8 unit has protected their reservation from fire and also responded to wildfires around the nation. This group of firefighters, which recently became co-ed, soon earned the reputation of being fierce, loyal and dependable—and tougher than their male colleagues. Facing gender stereotypes and the problems that come with life on the impoverished reservation, the women became known as some of the country’s most elite firefighters. From director Sande Zeig and executive producer Heather Rae, APACHE 8 combines archival footage and present-day interviews and focuses primarily on four women from different generations of Apache 8 crewmembers, who speak tenderly and often humorously of hardship, loss, family, community and pride in being a firefighter. The women are separated from their families, face tribe initiation, and struggle to make a living in a community ravaged by unemployment and substance abuse. But while the women may have initially set out to try and earn a living in their economically challenged community, they quickly discover an inner strength and resilience that speaks to their traditions and beliefs as Native women.

"Facing gender stereotypes and the problems that come with life on the impoverished reservation, the women became known as some of the country’s most elite firefighters."

Sande Zeig has been actively working in the independent film business for over thirty-five years in both production and distribution.

She directed and produced six films, including the short Central Park, which premiered at the Sundance Film Festival in 1994; a feature The Girl, based on a short story by French writer Monique Wittig, in 2001, which premiered at the Toronto and Berlin Film Festivals; the documentary Soul Masters: Dr. Guo & Dr. Sha, 2008; Apache 8, a documentary about the first all-women wildland firefighting crew from the White Mountain Apache Tribe, broadcast widely on PBS in 2011; Sister Jaguar’s Journey, completed in 2015, which tells the story of a Dominican nun who finds peace and forgiveness through plant medicine in the Amazon rainforest, and The Living Saint of Thailand, a short film about Venerable Mae Chee Sansanee Sthirasuta, completed in 2019.

Zeig was the Founder and President of Artistic License Films, a film distribution company that distributed over a hundred films, including films by Ismail Merchant, Michel Negroponte, Jim Stark, Kore-eda Hirakazu and DA Pennebaker.

Zeig is developing a documentary on Monique Wittig, her partner, with whom she collaborated on a book, screenplays and plays. (1/21)

Native American survivors of sexual assault fight to restore personal and tribal sovereignty against the backdrop of an ongoing legacy of violent colonization.
Learn more

The Desert Is No Lady

With provocative imagery and spirited juxtapositions, THE DESERT IS NO LADY looks at the Southwest through the eyes of its leading contemporary women artists and writers, including author Sandra Cisneros. The nine women profiled are Pat Mora (poet), Sandra Cisneros (writer), Lucy Tapahonso (poet), Emmi Whitehorse (painter), Harmony Hammond (painter), Meridel Rubinstein (photographer), Nora Naranjo Morse (sculptor), Pola Lopez de Jaramillo (painter) and Ramona Sakiestewa (tapestry artist). The Southwest is a border territory - where cultures meet and mix - and the work of these nine women from Pueblo, Navajo, Mexican-American and Anglo backgrounds reflects its special characteristics. THE DESERT IS NO LADY is a vibrant celebration of the diversity of women's creativity and changing multicultural America. "An inspiring tapestry of history, imagination and daily life. I highly recommend it." - Vicki L. Ruiz, Arizona State University
Learn more

SOME REAL HEAT explores the small and relatively new world of female firefighters in San Francisco and their upward climb to gain access to a male-dominated field. Armed with axes, chainsaws, muscle, heart and determination, six daring women demonstrate how they single-handedly turn gender roles upside down by putting their lives on the line everyday in one of the riskiest jobs around. As they passionately talk about the tools of the trade, overcoming their fears and helping others, they reveal the fascinating history of women fire fighters and the gender bias that barred them from officially entering the U.S. Fire Department until 1974. They also explain the important role women paramedics play in fire departments and the surprising number of medical emergencies that they attend to on a weekly basis – a number that far outweighs actually putting out fires. Uncovering the myth and reality of this dangerous profession, this inspiring piece intimately delves into the strength and character that distinguishes these women as true modern-day heroes.
Learn more

Inspired by organizers at the Beijing Conference on Women in 1995, former construction worker Vivian Price spent years documenting the current and historical roles of women in the construction industry in Asia – discovering several startling facts. Capturing footage that shatters any stereotypes of delicate, submissive Asian women, Price discovers that women in many parts of Asia have been doing construction labor for centuries. But conversations with these women show that development and the resulting mechanization are pushing them out of the industry. Their stories disturb the notion of “progress” that many people hold and show how globalization, modernization, education and technology don’t always result in gender equality and the alleviation of poverty. Celebrating a range of women workers – from a Japanese truck driver, to two young Pakistani women working on a construction site in Lahore, to a Taiwanese woman doing concrete work alongside her husband – this film deftly probes the connections in their experiences. In a segment exploring the history of the Samsui women in Singapore (Chinese women who were recruited as construction laborers in the 1920's until they lost their jobs to mechanization in the 1970’s) unique archival footage and interviews with surviving Samsui offer an importation perspective on the historical and global scope of women workers’ struggles.
Learn more

TEA & JUSTICE chronicles the experiences of three women who joined the New York Police Department during the 1980s—the first Asian women to become members of a force that was largely white and predominantly male. In this award-winning documentary, Officer Trish Ormsby and Detectives Agnes Chan and Christine Leung share their fascinating stories about careers and personal lives, as well as satisfactions and risks on the job, the stereotypes they defied, and how they persevered. Intrigued by the image of Asian women in a non-traditional profession, filmmaker Ermena Vinluan explores her own mixed feelings about cops while honoring the challenges Ormsby, Chan and Leung embraced, and the far-reaching changes they helped bring about. Interviews with ordinary New Yorkers, leading advocates of law enforcement reform, and anti-police abuse activists consider proposed changes in police culture and explain how women’s preventive policing style, based on communication, contrasts with more reactive, physically forceful methods used by men. Humorous cartoons, lively graphics depicting cultural icons of strong Asian women, and original music enhance this nuanced study of race, gender, and power.
Learn more

When World War II broke out, reporter Martha Gellhorn was so determined to get to the frontlines that she left husband Ernest Hemingway, never to be reunited. Ruth Cowan’s reporting was hampered by a bureau chief who refused to talk to her. Meanwhile, photojournalist Dickey Chappelle wanted to get so close to the action that she could feel bullets whizzing by. This award-winning documentary tells the colorful story of how these three tenacious war correspondents forged their now legendary reputations during the war—when battlefields were considered no place for a woman. Narrated by Emmy® Award winner Julianna Margulies, this film features an abundance of archival photos and interviews with modern female war correspondents, as well as actresses bringing to life the written words of these remarkable women. Their repeated delegation to the sidelines to cover the “woman’s angle” succeeded in expanding the focus of war coverage to bring home a new kind of story— a personal look at the human cost of war. NO JOB FOR A WOMAN: THE WOMEN WHO FOUGHT TO REPORT WWII has been made possible in part by a major grant from the National Endowment for the Humanities.