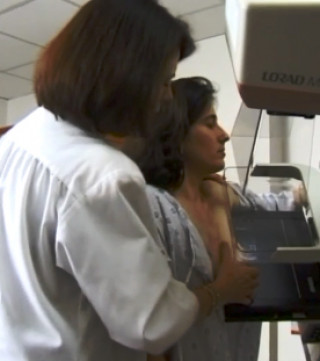 Searching for the Causes of Breast Cancer

From the makers of the Oscar-winning IN THE SHADOWS OF THE STARS, this fascinating documentary follows a group of women - all breast cancer activists who are fighting or have survived the disease - who are on a personal mission to unearth the causes of breast cancer. The result is RACHEL'S DAUGHTERS, an engaging detective story and detailed analysis of the science and politics of this epidemic.

Seeing themselves as spiritual heirs of author Rachel Carson, whose 1962 book SILENT SPRING warned of the dangers of DDT exposure, they focus on issues including chemical contamination, radiation, and electromagnetic exposure to find breast cancer's causes. Addressing environmental racism, inequalities in research funding, and disparities in cancer rates for women of color, they track the effects of social biases on cancer incidence and health care delivery.

Incorporating interviews with prominent scientists, documentary footage from high cancer rate areas, and the investigating womens' personal battles to stay healthy, RACHEL'S DAUGHTERS offers a scientifically rigorous and intensely affecting view of this growing epidemic. An unprecedented warning of the dangers of industrialization; it is an inspiring rallying cry for those working to change current views about women's health.

"Very powerful dramatically as well as in terms of numbers of experts consulted and facts presented."

"Perhaps the most thoughtful, accessible, and comprehensive documentary ever produced on the subject of breast cancer...at once informative and highly personal."

"An education and a revelation, this fascinating documentary is wildly effective as an examination not only of the scientific causes of this disease but also of its human face."

The Sermons of Sister Jane

From Oscar and Emmy Award-winning filmmakers Allie Light and Irving Saraf (Dialogues With Madwomen and In The Shadow of The Stars), in partnership with Carol Monpere, also an Emmy Award-winner, comes their latest film, The Sermons Of Sister Jane: Believing the Unbelievable. This documentary is an engaging portrait that sparkles with the courage, wit and humanity of Sister Jane Kelly, who combines her deep spiritual faith with her equally powerful commitment towards resistance and change. When Sister Jane discovered that a priest in her church was molesting young men and stealing from the congregation, and when the evidence was ignored by the church, she contacted the press, creating a scandal. Throughout the film she shares her progressive views on issues such as birth control, homosexuality, and women priests. She impels the Catholic Church to return to egalitarian roots of community. The scenes filmed at Plowshares, an organization she created to feed and serve the poor and homeless, demonstrate Sister Jane’s powerful ability to translate her faith into profoundly meaningful action. This touching documentary, skillfully produced by these acclaimed filmmakers, reveals Sister Jane’s long struggle to speak out against what she believed was wrong, and how this ongoing battle ultimately has heart-breaking results.
Learn more

This absorbing documentary examines the lives of Asian Americans through the inspirational poetry of Mitsuye Yamada and Nellie Wong. Interviews, rare archival footage, intimate family scenes and a lively dialogue between these fascinating women underscore the different histories of Chinese and Japanese Americans but also shared experiences of biculturalism and generational difference. Ideal for literature and poetry classes, women's studies and Asian American groups.
Learn more

Unlike anyone you've ever met, LuLu is a hard-living, chain-smoking rebel with a tender heart; poet with a potty mouth; farm girl; former cheerleader; world-class biochemistry pioneer; and beloved professor. Aka Dr. Louise Nutter, she has just discovered a new anti-cancer drug when, at 42, she learns she has terminal breast cancer. Reminiscent of Peter Friedman and Tom Joslin’s SILVERLAKE LIFE, THE LULU SESSIONS, via video diary, records the journey S. Casper Wong shared with her mentor, best friend, and on-again-off-again lover over the last 15 months before LuLu died. Her compelling film chronicles how the two women test the limits of their bond and take on life's ultimate adventure, shedding old presumptions and values while adopting new ones in the process. Reflective, intensely honest, and surprisingly humorous, this unforgettable documentary makes life’s last journey accessible in ways rarely seen before on screen.
Learn more

"I was always so afraid that someone would ask me (where I was when JFK was shot), and I would have to say I was in a mental institution", says director Allie Light. This moving and informative film features seven women--including the filmmaker--describing their experiences with manic depression, multiple personalities, schizophrenia, euphoria and recovery. Candid interviews are enriched with dramatic reenactments and visualizations of each woman's history, emotions, and dreams--the private symbols of madness and sanity. The social dimensions of women and mental illness are revealed in testimony about sexual assault, incest, racism and homophobia, the abuses of the medical establishment, family, and church. Acknowledging that "madness" is often a way of explaining women's self-expression, this film charges us to listen to the creativity and courage of survivors. Produced by the Academy Award winning filmmakers of IN THE SHADOWS OF THE STARS, DIALOGUES WITH MADWOMEN is a ground-breaking film about women and mental illness.
Learn more

“Every once in a while someone comes up with a film that sends us a clear signal that it's time to re-evaluate our lives. The film MY LEFT BREAST is not just for women living with breast cancer--it's for everyone.” – Canadian Breast Cancer Foundation. Incorporating a unique blend of wit, wisdom and resilience, filmmaker Gerry Rogers bravely recounts her story of breast cancer survival to share with the world that life, indeed, can continue with full force and vigor. Shortly after being diagnosed at age 42, Rogers began to document her ordeal on camera in an attempt to confront her own questions and fears about breast cancer. Rather than present a somber and morose meditation on this difficult experience, she decides to invoke humor to frankly reflect on the meaning of this disease on her life, as well as on the lives of her friends and family. The result is a one-of-kind approach to positively coping with a potentially fatal disease. Rather than merely chronicling how one copes with an infirmity, MY LEFT BREAST serves as a model for overcoming every challenge and obstacle in life with clarity and honesty. In the same vein as the most highly regarded films on health, such as COMPLAINTS OF A DUTIFUL DAUGHTER, this powerful film intimately embraces the emotional challenges of disease, demonstrates acceptance and, above all, affirms life.
Learn more
Shopping Cart