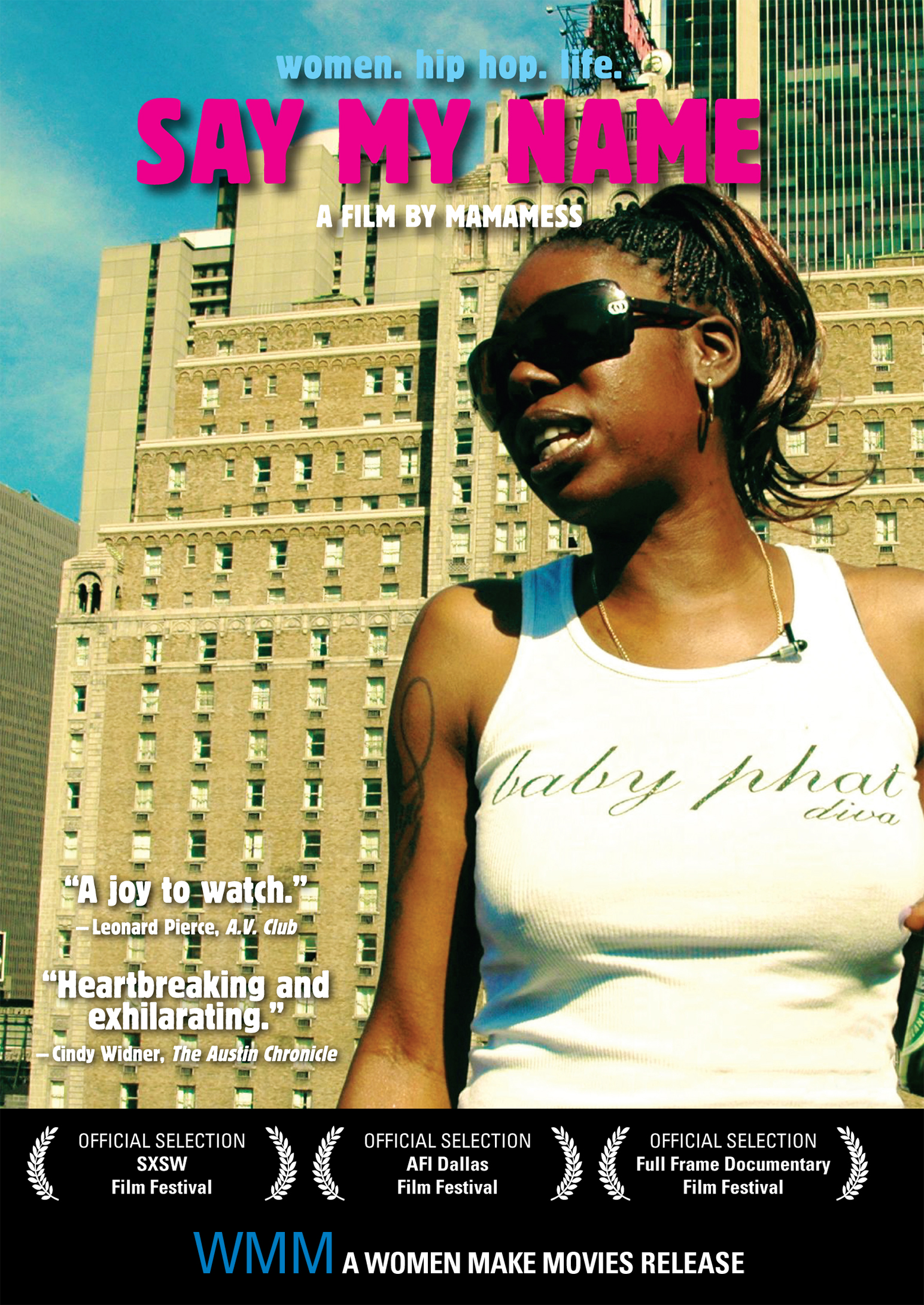 A film by Nirit Peled

In a hip hop and R&B world dominated by men and noted for misogyny, the unstoppable female lyricists of SAY MY NAME speak candidly about class, race, and gender in pursuing their passions as female MCs. This worldwide documentary takes viewers on a vibrant tour of urban culture and musical movement, from hip hop’s birthplace in the Bronx, to grime on London’s Eastside, to Philly, Detroit, Chicago, Atlanta, and L.A., and points in between.

Featuring interviews and musical performances from a diverse cast of women that includes Remy Ma, Rah Digga, Jean Grae, Erykah Badu, Estelle, as well as newcomers Chocolate Thai, Invincible and Miz Korona, this powerful documentary delves into the amazing personal stories of women balancing professional dreams with the stark realities of poor urban communities, race, sexism, and motherhood. The more than 18 artists featured in SAY MY NAME battle for a place in a society that creates few chances for women. From emerging artists filled with new creativity, to true pioneers like MC Lyte, Roxxanne Shante, and Monie Love, these are women turning adversity into art.

“Say My Name is a call for recalibration of the control masculine rhetoric has within and around hip hop…[and] a desperately needed call and response to reclaim a female space for hip hop.”

“Relevant and important in the continuing and evolving discourse on hip hop in American culture…The young women are the vanguard for the next generation of artists not afraid to say things that others may be thinking.”

“A gripping view of the world of women in hip-hop…. [P]oignant.”

“A compelling documentary on women in hip-hop…rarely didactic and never plodding or obvious…a joy to watch.”

Nirit Peled (Israel, 1973) has been working in Amsterdam as an audio-visual artist for the last eight years. She is a community based, cultural artist and film director, as well as co-founder of Mamamess, a production company she runs with her partner Dave Hemmingway. Her work can be broadly categorized within video and interactive projects. Recently Peled has been focusing more on directing short films, animation and documentaries that seek to create dialogue, confrontation and communication. She has also worked on numerous political, cultural projects with inner city youth, both in the Netherlands and abroad.

For her recent project and debut documentary, SAY MY NAME, Peled traveled around the world documenting female vocalists, MCs, and spoken-word artists in urban environments. The sequel SAY MY NAME IN AFRICA is still in production. Other recent projects include POETRY IN MOTION, three beautifully animated poems by the Jamaican poet Staceyann Chin, and the documentaries REDNOSE GOES TO CUBA (about two DJs collaborating with Cuban musicians in Havana), and THE BATTLE (about Arab-Israeli rappers).
(02/09)

Nobody Knows My Name

NOBODY KNOWS MY NAME tells the story of women who are connected by their love for hip-hop music. Despite the fact that these talented female artists exist within a culture that revolves around self-expression, the subjects of Raimist’s documentary must struggle to be heard. Asia One has found a niche as an organizer of the B-Boy Summit, but longs for a sense of female community. DJ Symphony is the sole female member of the The World Famous Beat Junkies. Leaschea lives a turbulent life, even though she has been signed by a major label. Lisa married in the hip-hop lifestyle, and now raises a hip-hop family. Medusa is the successful queen of the L.A. hip-hop underground. T-Love, an ex-Cripette, hopes her creative talents will help her change her lifestyle. Through the candid study of these women, documentarian Raimist explores a fascinating and diverse feminist community, which yearns to find a place in a male-dominated subculture that is, in itself, marginalized. Ultimately, Raimist succeeds in empowering these self-actualized women by giving them the voice for which they struggle.
Learn more

Rapper, singer and activist, Sister Fa is hero to young women in Senegal and an unstoppable force for social change. A childhood victim of female genital cutting (FGC), she decided to tackle the issue by starting a grassroots campaign, “Education Without Excision,” which uses her music and persuasive powers to end the practice. But until 2010 there’s one place she had never brought her message – back home to her own village of Thionck Essyl, where she fears rejection. SARABAH follows Sister Fa on this challenging journey, where she speaks out passionately to female elders and students alike, and stages a rousing concert that has the community on its feet. A portrait of an artist as activist, SARABAH shows the extraordinary resilience, passion and creativity of a woman who boldly challenges gender and cultural norms. It’s an inspiring story of courage, hope and change.
Learn more

LIVING THINKERS: AN AUTOBIOGRAPHY OF BLACK WOMEN IN THE IVORY TOWER examines the intersection of race, class and gender for Black women professors and administrators working in U.S. colleges and universities today. Through their diverse narratives, from girlhood to the present, Black women from different disciplines share experiences that have shaped them, including segregated schooling as children, and the trials, disappointments and triumphs encountered in Academia. Though more than 100 years have passed since the doors to higher education opened for Black women, their numbers as faculty members are woefully low and for many still, the image of Black women as intellectuals is incomprehensible. And while overtly expressed racism, sexism and discrimination have declined, their presence is often still often unacknowledged. Through frank and sometimes humorous conversations, this documentary interrogates notions of education for girls and women and the stereotypes and traditions that affect the status of Black women both in and out of the Academy. A perfect companion film for any classroom discussion on the intersection of racism, sexism and/or feminism.
Learn more

In this accomplished documentary, acclaimed filmmaker Pratibha Parmar (A PLACE OF RAGE, WARRIOR MARKS) explores the intersection of feminism with popular music, focusing on the role of female recording artists in the 1990s and their influence on modern women. Parmar argues that, far from being dead, feminism has thrived and expanded its reach through the direct, aggressive, and revolutionary medium of rock music, and through the role models of performers like Madonna and Ani DiFranco. Intercutting performance footage with interviews, Parmar explores her thesis with some of the most outspoken female musicians, feminist theorists, and journalists of the UK and US, including Sinead O’Connor, Skin (Skunk Anansie), Chrissie Hynde (The Pretenders), Tori Amos, Ani DiFranco, Camille Paglia, and Gloria Steinem. THE RIGHTEOUS BABES offers a searing and timely critique of the commercialization of feminism through 'Girl Power' Spice Girls style, ditzy Ally McBeal and her trans-Atlantic counterpart, Bridget Jones. With critical insight and candidness, this powerful and timely documentary demonstrates the vibrancy and relevance of feminism to women and young girls today. Essential viewing for feminists, post-feminists and anti-feminists alike.
Learn more
Shopping Cart