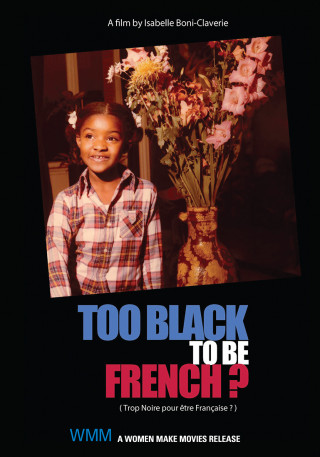 A film by Isabelle Boni-Claverie

In this documentary film, Isabelle Boni-Claverie explores the role of race and the persistence of racism in France, as well as the impact of the French colonial past. Through an exploration of her personal family history, and interviews with historians and academics, TOO BLACK TO BE FRENCH peels back the layers of race relations in supposedly institutionally colorblind France.

TOO BLACK TO BE FRENCH is a compelling documentary that discloses, in a frank and honest way, a rarely seen example of racism outside of the U.S. Focusing on the popular debate about racism as it relates to nationality, colorism and classism, the filmmaker’s attempt to discover her own French roots takes the viewer along on her journey. Addressed from this very personal perspective makes the experience that much more captivating, yet alarming.

Isabelle Boni-Claverie is an author, screenwriter, and film director born in the Ivory Coast. She moved to Switzerland when she was a few months old, then to France, but mostly grew up in Paris. In school, she studied French modern Literature and Art History. After graduating from the Sorbonne, she entered the Parisian film school La Fémis where she graduated in 2000 with a specialization in screenwriting. At the age of 17, Isabelle Boni-Claverie launched her writing career with the novel, "La Grande Dévoreuse" (The Great Devourer). It received an award at Le Prix du Jeune Ecrivain de Langue Française and was published in a collective book, Villes d’exil, by Le Monde Editions. Ten years later it was republished in the Ivory Coast by Nouvelles Editions Ivoiriennes (NEI). In 1994, Simon Njami asked her to collaborate with Revue Noire, a magazine dedicated to contemporary African art. Isabelle was still a student when she started a six-year collaboration with Revue Noire and was put in charge of the cinema section. Due to her growing interest in cinema, she wrote the screenplay for her first short film, Le Génie d'Abou (Abu’s Genie), which she directed in 1997. At that time she was a first year student at La Fémis and Le Génie d’Abou was supposed to be a mere training exercise. The film went on to be screened in New York, Montreal, La Havane, Perugia and many other festivals around the world, and received a special mention at the International Short Film Festival of Abidjan. In 2004, she directed POUR LA NUIT (For the Night). A film about grief and identity, it was distinguished by several awards: Jury Award of the Festival Provence, Terre de Cinéma, People’s Award of Amiens’ House of Arrest, Feminine Interpretation Award at the International Short film Festival of Abidjan, Special mention at the Festival du Cinéma Africain, d’Asie et d’Amérique Latine, Special mention by Signis oecumenic award. It was in competition at Locarno, Amiens, FESPACO and Carthage.

Isabelle has never stopped writing, notably for the small screen. She was one of the head writers of Seconde Chance (Second Chance) a TV series aired on TF1 in 2008, and nominated at the International Emmy Awards in 2009. Isabelle’s film directing career includes directing a few documentaries that tell real stories. Her film TOO BLACK TO BE FRENCH? was screened at NYU and Columbia University, with Boni-Claverie debating the issues of the effect of people’s perspectives, misunderstandings, and the contradictions nestled in French society, where the French colonial past still conditions racism and discrimination against the black citizens. Isabelle was also a juror in 2012 for the Mediterranean Short Film Festival of Tangier with Oumy Ndour and Safinez Bousbia. (01/20)

STATELESS, the new film from the critically acclaimed filmmaker of American Promise, looks at the complex politics of immigration and race in the Dominican Republic and Haiti, using a combination of magical realism and hidden camera techniques.
Learn more

This lyrical, unsettling film conveys the experience of children of mixed racial heritage. Suffering the aggression of racial harassment, a young girl and her brother attempt to wash their skin white with scouring powder. Starkly emotional and visually compelling, this semi-autobiographical testimony to the profound internalized effects of racism and the struggle for self-definition and pride is a powerful catalyst for discussion.
Learn more

Against the broader backdrop of modern India's political and social history, this lyrical documentary tells the story of the life of Krishna Sikand, the filmmaker's mother, from childhood to maturity. A rich mosaic of memory and impressions, DON'T FENCE ME IN captures the fragmented way in which we journey back through time. Evoking Krishna's earliest years in pre-independence Bombay as the daughter of a well-to-do Bengali family, the film also traces her post-colonial experiences--from marriage to a Punjabi army officer in the face of fierce family opposition, through the raising of two daughters and successful careers as an academic, small business entrepreneur, media consultant, journalist, and poet. Black-and-white photos of Krishna as a child and young woman are juxtaposed with clips from home movies shot by the filmmaker's father nearly thirty years ago, and recent location footage. Krishna's personal narrative is highlighted by her wonderful letters to her daughter and the poems that serve as milestones in her life.
Learn more

For many Black girls raised in the suburbs, the experiences of going to school, playing on the playground, and living day-to-day life can be uniquely alienating. BLACK GIRL IN SUBURBIA looks at the suburbs of America from the perspective of women of color. Filmmaker Melissa Lowery shares her own childhood memories of navigating racial expectations both subtle and overt-including questions like, "Hey, I just saw a Black guy walking down the street; is that your cousin?" Through conversations with her own daughters, with teachers and scholars who are experts in the personal impacts of growing up a person of color in a predominately white place, this film explores the conflicts that many Black girls in homogeneous hometowns have in relating to both white and Black communities. BLACK GIRL IN SUBURBIA is a great discussion starter for Freshman orientation week and can be used in a wide variety of educational settings including classes in sociology, race relations, African American Studies, Women's Studies, and American Studies.
Learn more

THUNDER IN GUYANA is the remarkable tale of Janet Jagan, a young woman from Chicago who married Guyanese activist Cheddi Jagan, and set off for the British colony to start a socialist revolution. For more than fifty years, the couple fought tirelessly to liberate the country from colonial rule and exploitation—despite battering by the international press, imprisonment and the intervention of world figures including Winston Churchill and John F. Kennedy. Free and fair elections were instituted in the early 90's, and Janet Jagan was elected president of Guyana in 1997, the first foreign-born and first woman to serve in the role. Historian Suzanne Wasserman (Jagan’s cousin) creates a rich historical portrait combining interviews with friends and family, excerpts from Janet’s letters, archival photographs and footage, and video captured during Janet’s dramatic presidential campaign. The film, with cinematography by Sundance Award winner Debra Granik, illuminates the life of an extraordinary woman and the complex history of the little understood country of Guyana.
Learn more