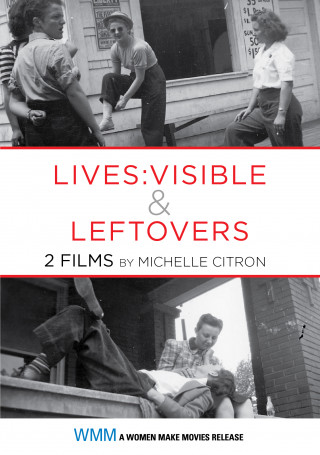 A film by Michelle Citron

Lesbians in a box…two thousand private snapshots hidden away for over fifty years reveal the rich history of Chicago’s working class butch/fem life in the pre-Stonewall era.

LIVES: VISIBLE (2017, 35 mins): Lesbians in a box… two thousand private snapshots hidden away for over fifty years reveal the rich history of Chicago’s working class butch/fem life in the pre-Stonewall era. Spanning four decades, from the 1930s to the early 1970s, the snapshots provide a rare look at a vanished and vibrant Lesbian culture: images of lovers and friends as they played, posed, serially switched partners, worked, partied, drank, and aged. Now we all take selfies; these women used a Brownie camera to tell the story of their community. LIVES: VISIBLE explores the ephemeral nature of culture and the power of the images we make.

LEFTOVERS (2014, 23 mins): Norma and Virginia were lovers for almost fifty years. They died isolated; the vibrant pre-Stonewall lesbian community of their youth long gone. A love story about the unforeseen trajectory of lives lived outside the mainstream told through the 2000 snapshots left behind.

"While Vivian Maier’s photos are surely beautiful and her life just as compelling, Citron’s merging of an almost utopian corporeality with ambiguities owing to the art of filmmaking, the nature of representation and the general dubiety of life insists that we view the past through a new lens."

For more than 40 years, the Lesbian Herstory Archives has combated lesbian invisibility by literally rescuing history from the trash.
Learn more

REBEL DYKES is a riotous documentary about the explosion that happened when punk met feminism, told through the lives of a gang of lesbians in post-punk, 1980s London.
Learn more

The tentative friendship of Anna, a feisty truck driver, and Diana, an upper middle-class doctor, provides the core for an unusual, intimate and moving look at women's experiences in jobs traditionally held by men. Based on actual interviews of forty working women, the film intercuts the story of Anna and Diana with fictionalized interviews of four other non-traditionally employed women.
Learn more

A touching tribute to the pioneering lesbian experimental filmmaker, Barbara Hammer, told through the lens and love of her partner of over 30 years.
Learn more

Filmmaker Irene Lusztig unearths a dark family secret in search of answers and reconciliation in her breakthrough feature documentary, RECONSTRUCTION. In communist Romania 1959, Lusztig’s maternal grandmother, Monica Sevianu, took part in a failed bank robbery (known as the Ioanid Gang bank heist) and was condemned to life in prison. Forty years later, the filmmaker returns to Bucharest to reassemble the pieces of her shocking story and construct a portrait of her estranged and enigmatic grandmother. The title of the documentary derives from a bizarre government propaganda film that reenacts the crime and trial of the robbery and shockingly stars the actual members of the Ioanid Gang – including Monica Sevianu. This surreal docu-drama incorporates interviews, contemporary footage shot in Bucharest and rare archival images, Lusztig reveals a mesmerizing family story spanning three generations about the subversive crime of six Jewish intellectuals, while presenting a compelling and complex examination of modern-day Romania.
Learn more

Archival montage, science fiction and an homage to 1970s feminist filmmaking are woven together to form this haunting and lyrical essay film excavating hidden histories of childbirth in the twentieth century. After several years of buying films online and working in historical archives, award-winning filmmaker Irene Lusztig amassed an unusual and fascinating collection of found footage aimed at teaching women how to be pregnant, give birth, and look after babies, along with training films for obstetricians and health care professionals, and a handful of home movies. Assembling her extraordinary trove from over 100 different sources, including newly rediscovered Soviet and French childbirth material tracing the evolution of Lamaze, THE MOTHERHOOD ARCHIVES inventively untangles the complex, sometimes surprising genealogies of maternal education. This extraordinary achievement illuminates our changing narratives of maternal success and failure while raising important questions about our social and historical constructions of motherhood.
Learn more