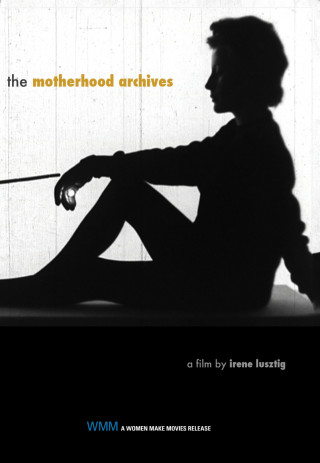 A film by Irene Lusztig

Archival montage, science fiction and an homage to 1970s feminist filmmaking are woven together to form this haunting and lyrical essay film excavating hidden histories of childbirth in the twentieth century. After several years of buying films online and working in historical archives, award-winning filmmaker Irene Lusztig amassed an unusual and fascinating collection of found footage aimed at teaching women how to be pregnant, give birth, and look after babies, along with training films for obstetricians and health care professionals, and a handful of home movies.

Assembling her extraordinary trove from over 100 different sources, including newly rediscovered Soviet and French childbirth material tracing the evolution of Lamaze, THE MOTHERHOOD ARCHIVES inventively untangles the complex, sometimes surprising genealogies of maternal education. This extraordinary achievement illuminates our changing narratives of maternal success and failure while raising important questions about our social and historical constructions of motherhood.

"Irene Lusztig's fearless and riveting investigation into motherhood and the unfree maternal body shows how a skilled filmmaker can wring both eloquence and entertainment from archival material.

"A must-see film for feminists teaching or thinking about motherhood today, as well as its representational legacy, THE MOTHERHOOD ARCHIVES makes critical inroads into subjects that feminism (or women) have always, somehow looked past..."

"The visually stunning footage curated from a century's worth of birthing movements will inspire impassioned discussion and debates about the changing political and social economy of motherhood. An excellent teaching tool."

"Through the masterful integration of archival footage and historical interpretation, Lusztig’s film catalogs the changing attitudes towards pregnancy, labor, and delivery. This film is perfect for students taking Women’s History or History of Medicine; actually, anyone planning a pregnancy should see this movie."

“It’s a beautifully made, carefully researched, and fascinating film that uses feminist filmmaking techniques to challenge some of the narratives surrounding pregnancy and childbirth and to give voice to some of the hidden histories and experiences.”

IRENE LUSZTIG is a feminist filmmaker, archival researcher, educator, and amateur seamstress. Her film and video work mines old images for new meanings in order to reframe, recuperate, and reanimate forgotten and neglected histories. Beginning with rigorous research in archives, her work brings historical materials into conversation with the present day, inviting viewers to contemplate questions of politics, ideology, and the production of personal, collective, and national memories. She is invested in expanding the form of artful nonfiction through her lyrical use of archival images, her commitment to listening-centered and collaborative cinematic approaches, patient durational shooting, and open-ended, associative editing where the viewer is encouraged to make connections between past and present. She is the solo director, producer, DP, and editor of three acclaimed feature length documentaries that have screened widely in festivals and are distributed by Women Make Movies: her debut film RECONSTRUCTION (2001), the feature length archival film essay THE MOTHERHOOD ARCHIVES (2013), and the performative documentary YOURS IN SISTERHOOD (2018).

Born in England and raised in Boston, Irene is a first generation American whose parents left Ceaucescu’s Romania in the late 1960s. Her work has been screened around the world, including at the Berlinale, MoMA, Film Society of Lincoln Center, Museum of Fine Arts Boston, Anthology Film Archives, Pacific Film Archive, Flaherty NYC, IDFA Amsterdam, Hot Docs, AFI Docs, BFI London Film Festival, Melbourne Film Festival, DocLisboa, and RIDM Montréal. She has been awarded fellowships from the MacDowell Colony, the Flaherty Film Seminar, the Radcliffe Institute for Advanced Study, the Fulbright, and the Rydell Visual Arts Fellowship. She teaches filmmaking at UC Santa Cruz where she is Professor of Film and Digital Media. She is a 2021 Guggenheim Fellow. (11/21)

Filmmaker Irene Lusztig unearths a dark family secret in search of answers and reconciliation in her breakthrough feature documentary, RECONSTRUCTION. In communist Romania 1959, Lusztig’s maternal grandmother, Monica Sevianu, took part in a failed bank robbery (known as the Ioanid Gang bank heist) and was condemned to life in prison. Forty years later, the filmmaker returns to Bucharest to reassemble the pieces of her shocking story and construct a portrait of her estranged and enigmatic grandmother. The title of the documentary derives from a bizarre government propaganda film that reenacts the crime and trial of the robbery and shockingly stars the actual members of the Ioanid Gang – including Monica Sevianu. This surreal docu-drama incorporates interviews, contemporary footage shot in Bucharest and rare archival images, Lusztig reveals a mesmerizing family story spanning three generations about the subversive crime of six Jewish intellectuals, while presenting a compelling and complex examination of modern-day Romania.
Learn more

In 1963 filmmaker Judith Helfand's mother was prescribed the ineffective, carcinogenic synthetic hormone diethylstilbestrol (DES), meant to prevent miscarriage and ensure a healthy baby. At twenty-five, Judith was diagnosed with DES-related cervical cancer. After a radical hysterectomy she went to her family's home to heal and picked up her camera. The resulting video-diary is a fascinating exploration of how science, marketing and corporate power can affect our deepest relationships. Shot over five years, A HEALTHY BABY GIRL tells a story of survival, mother-daughter love, family renewal, and community activism. Intimate, humorous, and searing, it is an invaluable resource for anyone interested in the relationship between women's health, public policy, medical ethics and corporate responsibility. A HEALTHY BABY GIRL was funded by the Independent Television Service (ITVS) with funds provided by the Corporation for Public Broadcasting.
Learn more

I Need Your Full Cooperation/Underexposed

In these two compelling films, Kathy High explores the relationship between women’s bodies and the medical institution. Now a classic, I NEED YOUR FULL COOPERATION (1989, 28 mins) is a critical commentary on the patriarchal medical world and the past experimental techniques used to control female sexuality and reproductive capacities. Combining drama and documentary, UNDEREXPOSED: THE TEMPLE OF THE FETUS, (1992, 72 mins) is a savvy and creative documentary probe into the high-tech baby-making market and emerging reproductive technologies.
Learn more

In a witty mix of rare archival footage and sound bites from religious and political leaders, filmmaker Jacqueline Frank takes a fast-paced look at 100 years of the fight for birth control and legalized abortion. Featuring a concise overview of the work of Planned Parenthood founder Margaret Sanger, CHOICE THOUGHTS illuminates how access to birth control became seen as a human right and how this dialogue continues around present day issues of choice. Discussion Guide available.
Learn more

This eye-opening, often amusing documentary by the director of Tiger Spirit, winner of Canada’s prestigious Donald Brittain Gemini Award, records the filmmaker’s quest for safe, sane and affordable ways to raise her child in a world embedded with toxic threats and still lead a normal life. Although new mother Min Sook Lee breast fed her daughter from birth, she used baby bottles too, only to discover that they leached a chemical byproduct linked to impaired health and serious diseases. This set in motion a journey that exposes hidden dangers in infant bath soaps, diaper rash creams, teething toys and many everyday products from an industry largely unregulated by law. For Lee, it also uncovers risks posed by our own homes and chemical contaminants we carry within our own bodies. Her search introduces us to others, including nursing mothers and parents helping to build youngsters’ natural immune systems, who are seeking alternative choices themselves and finding healthier, environment-friendly ways to rear their children. A personal essay that packs a punch, MY TOXIC BABY throws a spotlight on non-hazardous options that are available in our chemically saturated world, and further emphasizes women’s particular concerns about environmental hazards and health.
Learn more

From 1945-73, 1.5 million unmarried young American women, facing enormous social pressures, surrendered babies to adoption. Lacking sex education and easy access to birth control, they were forced into hiding while pregnant and then into “abandoning” their infants. In her latest film, Ann Fessler, Professor of Photography at Rhode Island School of Design, reprises the subject of her award-winning The Girls Who Went Away (National Book Critics Circle; Ballard Book Prize), which Ms. readers named an all-time best feminist book. Drawing on interviews with 100 women, Fessler lets them have their say and brings hidden history to light. We hear only their voices, which detail wrenching experiences against images from vintage newsreel and educational films reinforcing stereotypes of women’s roles following WWII. This gripping documentary will help today’s students grasp what life was like before the sexual and feminist revolutions had fully dawned.
Learn more

MOTHERTIME is a personal video diary that takes us on a corporeal journey in parenting via a small portable Go-Pro camera mounted on the filmmaker and her toddler over the period of a year and a half.
Learn more
Shopping Cart