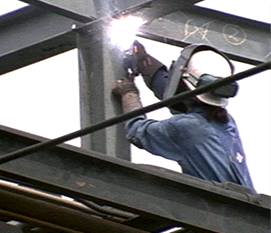 A film by Michelle Citron

The tentative friendship of Anna, a feisty truck driver, and Diana, an upper middle-class doctor, provides the core for an unusual, intimate and moving look at women's experiences in jobs traditionally held by men. Based on actual interviews of forty working women, the film intercuts the story of Anna and Diana with fictionalized interviews of four other non-traditionally employed women.

"Citron's film is a breakthrough. It makes women in nontraditional jobs visible."

WMM is pleased to release two early works by renowned film scholar Laura Mulvey, co-written and co-directed with Peter Wollen. Mulvey came to prominence in the early 1970s with her seminal essay Visual Pleasure and Narrative Cinema. One of the most widely cited and anthologized articles in the field of contemporary film theory, this groundbreaking work investigated questions of spectatorial identification and its relationship to the male gaze. With this essay and other articles, Mulvey helped establish feminist film theory as a legitimate field of study. AMY! (1980, 30 minutes) Amy Johnson was the first woman to fly solo from Great Britain to Australia. Mulvey and Wollen’s experimental documentary combines newsreel footage of the aviator’s arrival, dramatic recreations of events from her life and contemporary discussions by feminist groups on the subject of heroism in this most unconventional biopic. FRIDA KAHLO AND TINA MODOTTI (1983, 29 minutes) Originally commissioned for an international art exhibition this short film is an unconventional portrait of painter Frida Kahlo and photographer Tina Modotti. Simple in style but complex in its analysis,FRIDA KAHLO AND TINA MODOTTI explores the divergent themes and styles of two contemporary and radical women artists working in the upheaval of the aftermath of the Mexican Revolution.
Learn more
Shopping Cart