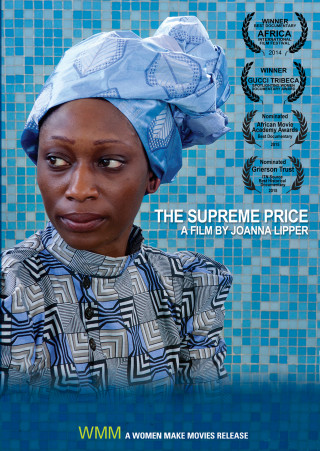 A film by Joanna Lipper

Director Joanna Lipper elegantly explores past and present as she tells the remarkable story of Hafsat Abiola, daughter of human rights heroine Kudirat Abiola, and Nigeria's President-elect M.K.O. Abiola, who won a historic vote in 1993 that promised to end years of military dictatorship. Shortly after the election M.K.O. Abiola's victory was annulled and he was arrested. While he was imprisoned, his wife Kudirat took over leadership of the pro-democracy movement, organizing strikes and rallies, winning international attention for the Nigerian struggle against human rights violations perpetrated by the military dictatorship. Because of this work, she too became a target and was assassinated in 1996. In this riveting political thriller, the Abiola family’s intimate story unfolds against the epic backdrop of Nigeria's evolution from independence in 1960 - through the Biafra War, subsequent military dictatorships and the tumultuous transition to civilian rule - through present day as Hafsat continues to face the challenge of transforming a corrupt culture of governance into a democracy capable of serving Nigeria's most marginalized population: women.

"Ms. Lipper has used previously unseen archive footage to great effect... it is surely a good thing that a film like this now exists, touching on the issues the kidnappings brought to life and showing how important women are to a country like Nigeria and why it is in everyone’s interest to listen to them."

"'The Supreme Price' is a Door to Africa's Recent History."

"Joanna Lipper’s film looks at the pro-democracy movement in the corrupt African "The Supreme Price may sound like a metaphorical title, but after seeing this strong, forthright documentary, you'll understand it's the literal truth."

Joanna Lipper is one of the “…finest and noblest documentary filmmakers this year…she certainly succeeds with this one, catching a crucial moment in that explosive country where 200 girls have been lost, at best."

"In Joanna Lipper's 'The Supreme Price' the story it tells is riveting...as the camera follows the resilient Hafsat in her effort to educate and mobilize the women of Nigeria, Lipper deftly fills in the historical context."

"The Supreme Price is one of ten films all human rights activists should see.”

"It is a deeply profound and beautiful experience, and an integral film to watch."

Recommended, *** "The Supreme Price presents rarely-seen footage…a well-researched documentary that provides historical context to the continuing problems (including mass rape) in this troubled African nation, this is recommended."

"African Cinema: Top Five Political Films - The Supreme Price...combines daring reporting with behind the scenes access and dramatic archive footage through some of the country’s most unstable periods. A fascinating history lesson of a nation still struggling to emerge from military rule."

Joanna Lipper is an award-winning filmmaker and Lecturer at Harvard University where she teaches Using Film for Social Change in the Department of African and African-American Studies. Her work as a documentary filmmaker has been supported by the MacArthur Foundation, Ford Foundation, ITVS, Britdoc Foundation, the Gucci Tribeca Documentary Fund, Women Make Movies and Chicken & Egg Pictures. Her latest documentary, The Supreme Price, received the Gucci Tribeca Spotlighting Women Documentary Award. An extended trailer from the film was commissioned to launch Gucci’s Chime for Change Women’s Empowerment Campaign at TED 2013. Previous films Lipper has produced and directed include Inside Out: Portraits of Children (1996), Growing Up Fast (1999) and Little Fugitive (2006). Lipper is the author of the nationally acclaimed book Growing Up Fast. Her photography has been published and exhibited in the US and overseas. (5/14)

Winner of the Prix Art et Essai at the Cannes Film Festival, SISTERS IN LAW is the story of two women in Cameroon determined to change their community.
Learn more

Uncovering amazing stories of hope in the aftermath of the Rwandan genocide, Academy Award-Nominee GOD SLEEPS IN RWANDA captures the spirit of five courageous women as they rebuild their lives, redefine women’s roles in Rwandan society and bring hope to a wounded nation. The 1994 Rwandan Genocide left the country nearly 70 percent female, handing Rwanda’s women an extraordinary burden and an unprecedented opportunity. Girls are attending school in record numbers, and women now make up a large part of the country’s leadership. Working with two cameras and no crew except for their translator—a genocide survivor herself—the filmmakers uncover incredible stories: an HIV-positive policewoman raising four children alone and attending night school to become a lawyer, a teenager who has become head of household for her four siblings, and a young woman orphaned in her teens who is now the top development official in her area. Heart-wrenching and inspiring, this powerful film is a brutal reminder of the consequences of the Rwandan tragedy, and a tribute to the strength and spirit of those who are moving forth. ** Emmy Winner for Best Documentary and Academy Award Nominee for Best Documentary Short!**
Learn more

After surviving a 14-year civil war and a government riddled with corruption, Liberia is ready for change. On January 16, 2006, Ellen Johnson-Sirleaf was inaugurated President – the first freely elected female head of state in Africa. Having won a hotly contested election with the overwhelming support of women across Liberia, Sirleaf faces the daunting task of lifting her country from debt and devastation. She turns to a remarkable team of women, appointing them in positions such as police chief, finance minister, minister of justice, commerce minister and minister of gender. With exclusive access, directors Siatta Scott Johnson and Daniel Junge follow these “Iron Ladies” behind the scenes during their critical first year in office as they tackle indolent bureaucracy, black markets and the omnipresent threat of violent riots. Highlighting the challenges that African countries currently face, this film provides an uplifting example of women who have become the backbone of change. As the filmmakers explore a historic transition from authoritarianism to democracy, the viewer is treated to a joyous, inspirational testimony of the political power of women's leadership and diplomacy.
Learn more

JUSTICE FOR SALE follows the young, courageous Congolese human rights lawyer Claudine Tsongo who refuses to accept that justice is indeed “For Sale” in her country. When she investigates the case of a soldier convicted of rape, she becomes convinced his trial was unfair and uncovers a system where the basic principles of law are ignored—and when the system fails, everyone becomes a victim. The documentary not only provides a glimpse into the failings of the Congolese judicial system but also raises questions about the role of the international community and non-governmental organizations in reforming it. Does their financial support cause justice to be for sale? And who pays the price? This is the third documentary in Dutch filmmakers Ilse and Femke van Velzen’s trilogy about the Congo, following FIGHTING THE SILENCE, about the consequences for victims of sexual violence and WEAPON OF WAR, confessions by those who perpetrated the acts. These films are essential viewing for anyone interested in the issues facing contemporary Africa.
Learn more
Shopping Cart