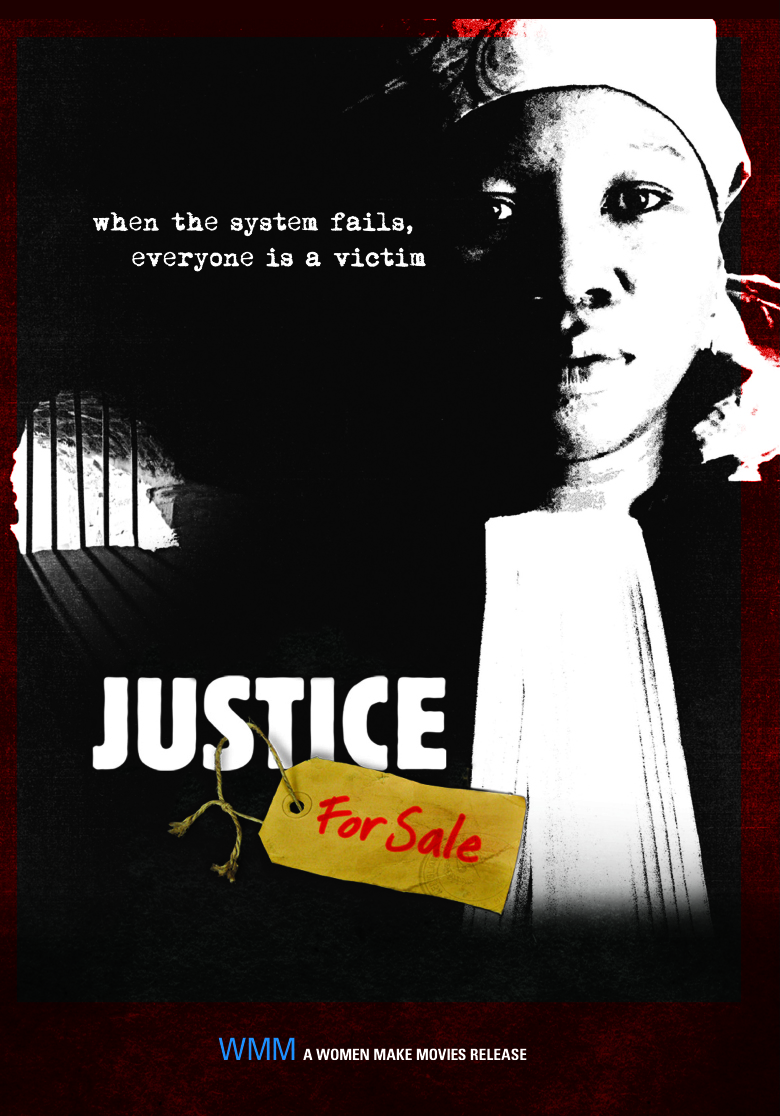 JUSTICE FOR SALE follows the young, courageous Congolese human rights lawyer Claudine Tsongo who refuses to accept that justice is indeed “For Sale” in her country. When she investigates the case of a soldier convicted of rape, she becomes convinced his trial was unfair and uncovers a system where the basic principles of law are ignored—and when the system fails, everyone becomes a victim. The documentary not only provides a glimpse into the failings of the Congolese judicial system but also raises questions about the role of the international community and non-governmental organizations in reforming it. Does their financial support cause justice to be for sale? And who pays the price?

This is the third documentary in Dutch filmmakers Ilse and Femke van Velzen’s trilogy about the Congo, following FIGHTING THE SILENCE, about the consequences for victims of sexual violence and WEAPON OF WAR, confessions by those who perpetrated the acts. These films are essential viewing for anyone interested in the issues facing contemporary Africa.

"...there is always something in their films that amazes me. In this one, there is a female lawyer, who is very well chosen. She makes a very cynical remark that as these trials are paid for by NGOs, they demand to see some measure of success. So now and then punishments are given just to satisfy the requirements of these NGOs - this was one scene that I thought was remarkable."

“Since the first film, the Congo’s rape record has captured the world’s attention and numerous international NGOs have set up local operations aimed at bringing rapists to justice. …[the film] looks set to prompt some interesting discussions”

“Highly recommended and absolutely necessary for all African studies programs.”

Born in 1980, twin sisters Ilse and Femke van Velzen are a documentary filmmaking team that aim to expose cultural injustices. The two sisters each studied social and cultural development in Amsterdam and Utrecht. After graduating in 2002, they began their own production company IFPRODUCTIONS in March 2003. IFPRODUCTIONS gives the sisters the freedom to work as independent filmmakers and producers.

The sisters use their films as educational tools, and travel to developing countries to screen their films. These screenings help expose the inequality and violence to local communities in their current living conditions. The inspiration for the van Velzen sisters’ films is promoting human rights and women’s rights across the globe. (02/11)

The Democratic Republic of the Congo’s seven year war was the deadliest ever recorded in Africa. During that time, more than 80,000 women and girls were raped. Only now that the country is formally at peace are the consequences of the brutality becoming truly visible. Rape is slowly seeping into everyday life. FIGHTING THE SILENCE tells the story of ordinary Congolese women and men that are struggling to change their society: one that prefers to blame victims rather than prosecute rapists. Rape survivors and their families speak out openly about the suffering they endured because their culture considers women second class citizens and rape a taboo. They give voice to thousands of other survivors and their families who have chosen to hide their grief and remain silent for fear of being rejected by their families and community. Girls and women survivors tell of the brutality they experienced. Married couples openly talk about the pain they endure. Husbands talk of the pressures that led them to abandon their wives and why they agreed to take them back. A father explains why he has given up on his daughter’s future and how he wishes he could afford to take her rapist to court. Soldiers and policemen share their (shocking) views about why rape continues to flourish despite the war having officially ended four years ago.
Learn more

Winner of the Prix Art et Essai at the Cannes Film Festival, SISTERS IN LAW is the story of two women in Cameroon determined to change their community.
Learn more

In the late 1990s, Rose Mapendo lost her family and home to the violence that engulfed the Democratic Republic of Congo. She emerged advocating forgiveness and reconciliation. In a country where ethnic violence has created seemingly irreparable rifts among Tutsis, Hutus and other Congolese, this remarkable woman is a vital voice in her beleaguered nation’s search for peace. When war came to Rose’s village, she was separated from her five-year-old daughter, Nangabire. Rose managed to escape with nine of her ten children and was eventually resettled in Phoenix, Arizona. Over a decade later, mother and daughter are reunited in the US where they must face the past and build a new future. As mother and daughter get to know one another, they must come to terms with a painful past, and define what it means to be a survivor, a woman, a refugee and an American. Through this intimate family portrait unfolding against the wider drama of war, we explore the long-term and often hidden effects of war on women and families, particularly those in traditional societies—financial despair, increased susceptibility to rape, and social ostracism. PUSHING THE ELEPHANT captures one of the most important stories of our age, a time when genocidal violence is challenged by the moral fortitude and grace of one woman’s mission for peace. This is a powerful first-person portrait of an indomitable woman dedicated to peace and the healing power of forgiveness. A moving, joyful and hopeful chronicle of refugee experience and acculturation in the U.S. today, PUSHING THE ELEPHANT is also an insightful portrait of the changing face of immigration in our increasingly diverse society.
Learn more

In no other country has sexual violence matched the scale of brutality reached in the Democratic Republic of Congo (DRC). During nearly two decades of conflicts between rebels and government forces, an estimated 150,000 Congolese women and girls fell victim to mass rape. That figure continues to rise. WEAPON OF WAR, an award-winning film honored by Amnesty International, journeys to the heart of this crisis, where we meet its perpetrators. In personal interviews, soldiers and former combatants provide openhearted but shocking testimony about rape in the DRC. Despite differing views on causes or criminal status, all reveal how years of conflict, as well as discrimination against women, have normalized brutal sexual violence. We also see former rapists struggling to change their own or others’ behavior, and reintegrate into their communities. A companion to FIGHTING THE SILENCE and its portraits of Congolese rape survivors, this indispensable resource provides unique insights into strategic uses of rape as a military weapon - and the motives of the men who employ it.
Learn more

Director Joanna Lipper elegantly explores past and present as she tells the remarkable story of Hafsat Abiola, daughter of human rights heroine Kudirat Abiola, and Nigeria's President-elect M.K.O. Abiola, who won a historic vote in 1993 that promised to end years of military dictatorship. Shortly after the election M.K.O. Abiola's victory was annulled and he was arrested. While he was imprisoned, his wife Kudirat took over leadership of the pro-democracy movement, organizing strikes and rallies, winning international attention for the Nigerian struggle against human rights violations perpetrated by the military dictatorship. Because of this work, she too became a target and was assassinated in 1996. In this riveting political thriller, the Abiola family’s intimate story unfolds against the epic backdrop of Nigeria's evolution from independence in 1960 - through the Biafra War, subsequent military dictatorships and the tumultuous transition to civilian rule - through present day as Hafsat continues to face the challenge of transforming a corrupt culture of governance into a democracy capable of serving Nigeria's most marginalized population: women.
Learn more

U.S. sexual assault statistics are startling—and have remained unchanged for decades. The latest White House Council on Women and Girls report reveals that nearly one in five women experiences rape or attempted rape in her lifetime. Among college student victims, who have some of the highest rates of sexual assault, just 12 percent report incidents to law enforcement officials. In earlier studies, 15% of sexual assault victims were younger than 13; 93% of juvenile victims knew their attacker. IT WAS RAPE gives human faces and voices to statistics, breaking through the silence, denial and victim blaming that allow an epidemic to thrive. Eight women of different backgrounds, ages and ethnicities relate personal stories of surviving sexual assault in their younger years, as well as their struggles toward healing, empowerment, and finally speaking out. By award-winning feminist author, filmmaker and activist Jennifer Baumgardner, this strikingly relevant documentary will engage all audiences in needed dialogue about the prevalence of sexual assaults in the U.S., at our schools and colleges, and the elements promoting rape culture on and off campus. IT WAS RAPE is a crucial resource for colleges and communities to meaningfully address Title IX issues around sexual violence.
Learn more
Shopping Cart