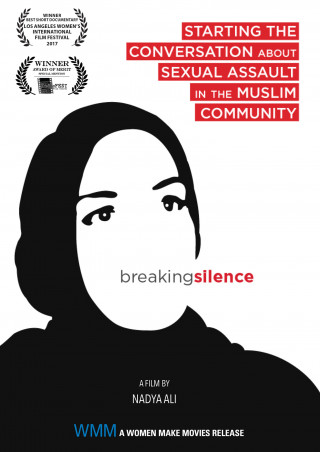 A film by Nadya Ali

Three Muslim women share their stories of sexual assault—and, in a deeply personal way, they challenge the stigma that has long suppressed the voice of survivors.

Three Muslim women share their stories of sexual assault—and, in a deeply personal way, they challenge the stigma that has long suppressed the voice of survivors. Throughout America, many Muslim communities persist in stigmatizing all discussion of sex-related subjects. Even though sexual assault and abuse are widespread, conversations about it are rare—and the pressure for victims and their families to “keep it a secret” helps perpetuate abuse. BREAKING SILENCE takes a radical and humanizing approach to the emotional scars of sexual assault, giving women the space to share their voices without shame. Deepened by the perspectives of Imam Khalid Latif of The Islamic Center at NYU, the film challenges stereotypes and cultural beliefs held by both Muslims and the non-Muslim public. It is indispensable for those dealing with sexual assault and abuse in academic and non- academic settings, courses on Islamic and Middle Eastern Studies and Women’s Studies, and for any discussion of violence against women.

Nadya Ali is a documentary filmmaker with a BA in environmental biology and human rights from Barnard College. Her passion is exposing truths relating to social justice, conservation, and environmental issues, as evident in her film BREAKING SILENCE, for which Nadya was the director and producer. She was inspired to make BREAKING SILENCE after knowing for several years about family members and friends who were sexually assaulted as children and she hopes the film will help inspire them, along with millions of others, to break their silence. (01/20)

Told from the point of view of women advocating for accountability and change, this compelling documentary by USC Graduate Mishal Mahmud examines the sexual assault scandal at the University of Southern California, detailing crimes committed by former gynecologist Dr. George Tyndall and exposing the active cover-up on the part of the administration.
Learn more

They Call Me Muslim

In popular Western imagination, a Muslim woman in a veil – or hijab – is a symbol of Islamic oppression. But what does it mean for women’s freedom when a democratic country forbids the wearing of the veil? In this provocative documentary, filmmaker Diana Ferrero portrays the struggle of two women – one in France and one in Iran – to express themselves freely. In 2004, the French government instituted an "anti-veil law," forbidding Muslim girls from wearing the hijab to school. Samah, a teenager in Paris who, at 14 decided to wear the veil, explains how the law attacks her sense of identity – and does not make her feel liberated. “Who says that freedom is not wearing anything on your head?” she asks. Half a world away in Tehran, “K,” forced to wear the hijab by the Islamic regime, defiantly wears it her own way – and her translucent scarf loosely draped over her hair puts her at risk of arrest. When Ferrero films her at home, K, comfortable in a tank top and shorts, says, “They call me Muslim... But do you see me as a Muslim? What do you have in your mind for a Muslim person?” Beautifully shot and finely crafted, THEY CALL ME MUSLIM highlights how women still must struggle for the right to control their own bodies – not only under theocratic regimes, but also in secular, democratic countries where increasing discrimination against Muslims and sexism intersect.
Learn more

A deeply personal documentary, UNAFRAID gives voice to four, diverse rape survivors and takes a historic look back at the pioneering treatment center where they now receive counseling. In her directorial debut, Karin Venegas highlights the work of two unsung feminist heroes in the movement for victims’ rights at the height of 1970s feminism and the Women’s Movement. From breaking victims’ silence to the revolutionary invention of the rape kit, this powerful film intimately explores the impact of rape and the capacity of ordinary individuals to effect change. Although frequently referenced in popular culture, few audiences know of the rape kit’s feminist origins. UNAFRAID is the first film to address the grassroots genesis of this important tool, which not only made it easier to convict in the criminal justice system but which helped shape our very cultural acceptance of rape as a serious crime, worthy of prosecution and compassionate treatment. Together, UNAFRAID’s collage of voices aims to lift the stigma that traps victims in silence – and to remind its audience that social change is indeed possible. Essential viewing for Criminal Justice, Law and Women’s Studies Classrooms.
Learn more

FACES OF HARASSMENT is an experiment in storytelling about trauma. When the hashtag #MyFirstHarassment swept across Brazil, it showed not only the widespread experience of sexual harassment and assault, but a widespread hunger to bring it out of the shadows. FACES OF HARASSMENT amplifies this movement, by opening space for women to speak their own truth. The film was shot in a mobile storytelling van, parked in rich and poor neighborhoods alike across São Paulo and Rio de Janeiro and open to any woman. The van was a free, autonomous space, where women spoke to the camera directly, no interviewer or other influence present. FACES OF HARASSMENT offers an honest and unflinching look at the scourge of sexual harassment and assault - and at the radical possibilities for dignity and healing that can happen when women are free to speak completely for themselves.
Learn more

Every day, 5 million children in the U.S. either witness or are victims of domestic violence.
Learn more

Two teenage cousins in Argentina come of age together, overcoming the heinous acts of violence that interrupted their childhoods.
Learn more
Shopping Cart