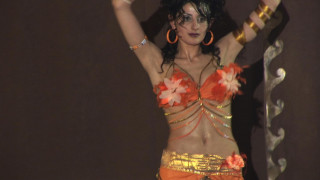 MISS GULAG is a rare look at the lives of the first generation of women to come of age in post-Soviet Russia, where women’s unemployment and incarceration rates are very high. Shot inside a Siberian prison camp and the surrounding countryside, this absorbing documentary traces the individual paths of three young women now at different points in their lives: Tatiana, whose parole hearing and early release are captured on film; Natasha, living in freedom with her family in a remote village; and Yulia, not yet twenty and facing still more prison time. Like their individual circumstances, the shared experience of long jail sentences has made them vigilant about their own destinies. Incarceration and an environment of constant surveillance are harsh, but no less so than life outside. Yet all three women, their families, and loved ones are sustained by hope.

Discovering an Internet item about an annual beauty pageant staged by women inmates of UF91-9, director Maria Yatskova (born in Moscow and living in the US since the age of five) was inspired to make MISS GULAG. The film’s compelling, moving stories of survival shed light on democracy’s darker side and offer a look at the issues facing women in post Soviet Russia.

“Offers a poignant look at the lives of three young women condemned to long years of imprisonment in a bleak provincial setting, and at the problems they and their families face following the collapse of the Soviet Union.”

“A powerful portrait of contemporary Russia…Shows continuity between the world of a prison and the world outside.”

“A smashing debut by a young documentarian who discovers a unique way to investigate contemporary Russian society.”

“Simply one of the finest documentaries of this decade."

Maria Yatskova was born in Moscow in 1976 and immigrated to the United States with her mother and grandmother five years later. She studied journalism in France and Belgium and film at the New School for Social Research in New York. Maria's engagement with Russian history began with her feature essay for the Associated Press surrounding the controversial remains of Russia's last Czar, which appeared in the LA Times.

More recently, her article about prison camp UF 91/9 in Siberia, titled "Crime and Beauty," appeared in the September 2006 issue of Marie-Claire magazine. The piece provided part of the vision behind her directorial debut, Miss GULAG, an official selection of the 57th International Berlin Film Festival. (8/14)

Raphaela Neihausen is the executive director of the acclaimed documentary series Stranger Than Fiction that takes place at the IFC Center, hailed as a "favorite New York documentary series" (New York Magazine) and "Best Documentary Programming" in New York (Time Out magazine). She is also executive director of the Montclair Film Festival. She worked for seven years at Mercer Management Consulting (now Oliver Wyman), advising Fortune 100 companies on strategic growth. Neihausen produced the documentary Miss Gulag (recipient of grants from the Ford Foundation and Sundance Documentary Fund) that premiered at the Berlin Film Festival and went on to be broadcast all over the world. She speaks six languages and holds a BSFS/MA from Georgetown University’s School of Foreign Service. (8/14)

“The Louisiana Correctional Institute is located in the swamps of southern Louisiana in the small town of St. Gabriel. Built in 1970 to house an increasing population of female convicts, today it houses the state's most dangerous female prisoners and often exceeds its population capacity of 900. 75% of these are mothers and one fourth of them are serving sentences of fifteen years or more. The prison compound has a surreal quality; there are no searchlight-capped towers or barbed wire fences. Filmmaker Khadivi delivers a striking, sensitive portrait of life in this deceptively peaceful atmosphere, which is filled with stories of life on the streets, abuse, freedom, childbirth and motherhood. Six women - a grandmother, a young high school student, a pregnant woman, a recovering heroin addict, a prison guard, and the only woman on death row - were brave enough to share their frustrations and hopes. Produced by Academy Award-nominated filmmaker Jonathan Stack ("The Farm").” - Human Rights Watch Film Festival Catalogue
Learn more

Their mothers may be convicted thieves, murderers and drug dealers, but the girls of Troop 1500 want to be doctors, social workers and marine biologists. With meetings once a month at Hilltop Prison in Gatesville, Texas, this innovative Girl Scout program brings daughters together with their inmate mothers, offering them a chance to rebuild their broken relationships. Intimately involved with the troop for several years, the directors took their cameras far beyond meetings to explore the painful context of broken families. Powerful insight comes from interviews shot by the girls themselves, which reveal their conflicted feelings of anger and joy, abandonment and intimacy—as well as the deep influence their mothers still have on them. An estimated 1.5 million children have incarcerated parents and 90 percent of female inmates are single parents. Their daughters are six times more likely to land in the juvenile justice system. TROOP 1500 poignantly reveals how an inspired yet controversial effort by the more than 90-year old Girl Scouts organization is working to help these at-risk young girls deal with their unique circumstances and break the cycle of crime within families.
Learn more

FREEDOM ROAD is a barren stretch that leads in and out of the Edna Mahan Correctional Facility for Women. Yet for some of the women incarcerated there, freedom has been redefined through the power of the pen. A testament to the profound influence of arts and education, Lorna Johnson’s compelling film features six female prisoners who are part of a unique memoir-writing workshop called “Woman is the Word.” Reading classic autobiographies such as INCIDENTS IN THE LIFE OF A SLAVE GIRL by Harriet Ann Jacobs and THE CANCER JOURNALS by Audre Lorde, the women are empowered to claim the events of their own lives and retell their own stories—ultimately liberating them from long-held secrets and silence. Moving interviews with the women inmates, their instructors and family members combined with verité footage of their fascinating classroom discussions reveal how poverty, under-education, domestic abuse have had a role in the destiny of many women in the program. Ultimately, the film examines the devastating cycle of imprisonment for the poor and underprivileged, and points to an inspired embodiment of prison reform.
Learn more

The Grey Area: Feminism Behind Bars

Women are the fastest-growing U.S. prison population today. Eighty percent are mothers of school-age children. Jenifer McShane's absorbing documentary gives human dimensions to these rarely reported statistics, taking us inside Bedford Hills Correctional Facility, a maximum security prison north of New York City. Shot over four years, MOTHERS OF BEDFORD follows five women - of diverse backgrounds and incarcerated for different reasons- in dual struggles to be engaged in their children's lives and become their better selves. It shows how long-term sentences affect mother-child relationships and how Bedford's innovative Children's Center helps women maintain and improve bonds with children and adult relatives awaiting their return. Whether it be parenting's normal frustrations to celebrating a special day, from both inside and out of the prison walls, this moving film provides unprecedented access to a little known, rarely shown, community of women.
Learn more

Tracking the country’s oldest beauty contest—from its inception in 1921 as a local seaside pageant to its heyday as one of the country’s most popular events—MISS AMERICA paints a vivid picture of an institution that has come to reveal much about a changing nation. The pageant is about commercialism and sexual politics, about big business and small towns. But beyond the symbolism lies a human story—at once moving, inspiring, infuriating, funny, and poignant. Combining rare archival footage, with a host of intimate interviews with distinguished commentators including Gloria Steinem, Margaret Cho, Isaac Mizrahi, former contestants and behind–the–scenes footage and photographs, the film reveals why some women took part in the fledgling event and why others briefly rejected it - how the pageant became a battle ground and a barometer for the changing position of women in society.
Learn more

In rural Siberia, romantic expectations are traditional and practical. The man is the head of the household. The woman takes care of the housekeeping and the children. But filmmaker Olga Delane doesn’t agree. While she was born in this small Siberian village, as a teenager she migrated to Berlin with her family, and 20 years of living in Germany has changed her expectations. SIBERIAN LOVE follows Delane home to her community of birth, where she interviews family and neighbors about their lives and relationships. Amusing and moving, this elegant film paints a picture of a world completely outside of technology, a hard-farming community where life is hard and marriage is sometimes unhappy—but where there are also unexpected paths to joy and family togetherness. Through clashing ideals of modern and traditional womanhood, SIBERIAN LOVE is a fascinating study of a country little known in the US and of a rural community that raises questions about domesticity, gender expectations, domestic abuse, childcare, and romance. Excellent for anthropology, women's studies, sociology, Russian and Eastern European Studies.
Learn more
Shopping Cart