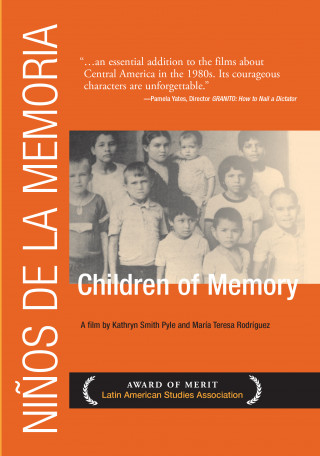 Hundreds of children disappeared without a trace during the Salvadoran civil war. Many were survivors of massacres carried out by the U.S.-trained Salvadoran army. Taken away from the massacre sites by soldiers, some grew up in orphanages or were "sold" into adoption abroad, not knowing their true history or identity. The film follows Margarita Zamora, an investigator with human rights organization Pro-Búsqueda as she traverses the Salvadoran countryside probing memory, swabbing DNA samples, and searching for disappeared children - including her own four siblings.

In the United States, Jamie Harvey, adopted from El Salvador in 1980, dreams of locating her birth family; but with no information, no contacts and no access to the Salvadoran military war archives, she is losing hope. CHILDREN OF MEMORY weaves together separate yet intertwined journeys in the search for family, identity and justice in El Salvador.

"...chronicles one of the worst human rights abuses during the war in El Salvador– the massacre of whole communities by the armed forces and the kidnapping of children who survived."

“… raises a fundamental issue for El Salvador: the role of memory in the reconstruction of the social and human fabric torn apart by violence. It is about the effort, often painful, to return to the past to give voice to the victims and collect their experiences so that the entire society recognizes what happened.”

“…portrays the determination and bravery of those dedicated to finding the country’s disappeared children, as it exposes the government stonewalling that continues to block the truth.”

“...brings light to one of the darkest chapters of Salvadoran history.”

“…supports the recuperation of historical memory...that permits us to strengthen a culture of peace in El Salvador.”

“…an important contribution to understanding what transpired during the war and contributes to ongoing efforts at reconciliation in El Salvador.”

“… an essential addition to the films about Central America in the 1980s. Its courageous characters and their urgent work to find all the missing children of El Salvador, are unforgettable.”

"Children of Memory is a densely packed film elucidating the basic elements of the El Salvadorian conflict....but more fully delving into the aftermath of loss and reconciliation, adeptly looking at the tragedy of the disappeared through three distinct perspectives."

Producer Kathryn Smith Pyle is a Sundance Institute Fellow (2011 Documentary Edit and Story Lab; 2009 Creative Producers Lab) whose former career as a grantmaker in the U.S. and Latin America was dedicated to grassroots development and giving voice to marginalized communities, often through community media projects. Her concerns as a documentary filmmaker continue that commitment, working in partnership with human rights groups and social movements. She has a doctorate in social policy from the University of Pennsylvania, writes about social issue documentaries for The Foundation Center's online publication, PhilanTopic, and is a photographer. She recently completed a short film on immigration reform, FARM LABOR. (6/12)

Producer/Director María Teresa Rodríguez's work often centers on untold stories of Latinos in the Americas whose experiences reflect a larger sociopolitical reality. Previous films includes Mirror Dance (with Frances McElroy), which was broadcast on PBS’ Independent Lens, received a LASA Award of Merit and a Cine Golden Eagle Award; the documentary Becoming American for the California Newsreel/Vital Pictures series Unnatural Causes: Is Inequality Making Us Sick? (PBS, 2008), which received a 2009 duPont-Columbia Award and a 2009 Communication Award in TV/Radio/Film from the National Academies, and From Here to There/ De Aquí a Allá, which received a First Place Award for Short Documentary at the XVII International Film Festival of Uruguay. She is a 2012 Fulbright Scholar, a 2011 Sundance Documentary Fellow (Edit and Story Lab), and the recipient of numerous grants and awards including a Pew Fellowship in the Arts and a Leeway Transformation Award, which recognizes the work of women artists engaged in social change. (8/13)

This Academy award-nominated documentary about the Argentinian mothers’ movement to demand to know the fate of 30,000 “disappeared” sons and daughters remains as extraordinarily powerful as when it was first released. As well as giving an understanding of Argentinian history in the ‘70s and ‘80s, LAS MADRES shows the empowerment of women in a society where women are expected to be silent. LAS MADRES provides a banner of hope in the international struggle for human rights.
Learn more

With conflicts raging on nearly every continent, war now regularly transcends the battlefield into everyday life - whether its increased security at airports or infringements on personal privacy. In WAR TAKES, Colombian filmmakers Adelaida Trujillo and Patricia Castaño turn the cameras on themselves to portray the tough realities of civil life in the violent, war-ravaged country of Colombia. Partners in an independent media company, they struggle to balance their family, business and political lives: reporting from dangerous parts of the country; managing their company as the economic situation worsens; parenting young children amid threats of violence and kidnapping; and rethinking their political views as war moves closer to the city. The filmmakers skillfully incorporate coverage from local television, archival footage, and narration to provide insightful analysis and historical background - including U.S. involvements in the region. Powerfully intimate and often humorous, their chronicle reveals how life goes on in Colombia - however surreal - against the terrifying backdrop of war.
Learn more

Albertina Carri’s second feature is a look at Argentina’s recent history from the perspective of a generation forced to mourn those of whom they have no recollection. Carri, who lost her parents to Argentina’s brutal military junta when she was three years old, travels through Buenos Aires with her crew to unravel the factual and emotional mysteries of her parents’ life, disappearance and death. Traces of Carri’s family emerge, colored by sharply conflicting perspectives. Who were the Carris? How did they disappear? Were they blonde, brunette, parents, heroes or merely a fiction of those who remember them? Crossing the line between documentary and fiction filmmaking, Carri enlists an actor, her parents’ former comrades, fading photographs and happy Playmobil dolls to investigate her parents’ untimely end. In the end, merging fact, rumor and imagination, Carri succeeds in reconstructing both her parents' history and her own construction of them. Emotionally fraught and intellectually provocative, THE BLONDS has resonance far beyond the tragic history of Argentina’s dirty war.
Learn more

On September 11, 1973, a military coup in Chile brought Augusto Pinochet to power, and over the next 17 years, thousands of women and men were taken from their homes- never to return. Since that time, Chilean women have danced the country’s traditional courtship dance alone, and LA CUECA SOLA has become a symbol of women’s struggle against the dictatorship. After 30 years in exile, critically acclaimed filmmaker Marilu Mallet returns to Santiago to meet with five Chilean women from three generations who suffered under the dictatorship and have emerged as heroes under democracy. Isabel Allende, Monique Hermosilla, Estela Ortiz, Carolina Toha and Moyenei Valdes all lost a father, a husband, or a friend, but have surmounted their grief to bravely speak out, each in their own way- from political action to vocal performance. Intimate interviews reveal the women’s shocking experiences under the dictatorship, while inspiring footage of their current work highlights their passion to rebuild. Illustrating throughout with a wealth of archival images, Mallet paints a vivid portrait of the country’s painful past and offers insight on Chile’s situation today. Important historically, socially and politically, this moving film expresses both the courage of women and the vitality of a nation.
Learn more

This award-winning documentary reveals the struggles of the citizens of Maclovio Rojas in Tijuana, Mexico as they battle the state government’s attempts to evict them from their homes to make way for multi-national corporations seeking cheap land and labor. Filmmaker Beth Bird followed the fiercely determined residents for three years as they persistently petitioned the state for basic services like running water, electricity and pay for their teachers, only to be met with bureaucratic stonewalling. Eventually, several community leaders are targeted for persecution, and one is arrested while others are forced into hiding. Balancing these stories of hardship, Bird also captures intimate scenes of daily life in Maclovio Rojas, revealing hard-won triumphs such as the building of a school by hand and the graduation of an elementary school class. This compelling and ultimately inspiring documentary is an eye-opening look at the human cost of globalization and a moving testament to the power of grassroots activism.
Learn more

MARIA IN NOBODY'S LAND is an unprecedented and intimate look at the illegal and extremely dangerous journey of three Salvadoran women to the US.
Learn more

More than 20,000 people disappeared in Mexico during the horrifically violent war on drugs waged by former President Calderon. With each missing person, a family is left behind in a desperate search to get answers from a government that is suspiciously ambivalent. Putting a human face on the most harrowing of statistics, director Alicia Calderon courageously captures the stories of three mothers - Natividad, Guadalupe, and Margarita - as they search for their children who have gone missing. One mother constantly retraces the last steps of her son, combing empty fields for his body; another travels all the way to Washington, DC, to plead for US intervention; and the last simply tries to forget the emptiness and raise her now-motherless grandson. In one of the most powerful documentaries about the human casualties of the Mexican narco-wars, these women’s stories are among the many that stand for truth and justice for the 26,000 missing people in Mexico today. With their lives now completely devoted to seeking out the truth, they pursue any avenue possible, in the face of an indifferent government which considers their loved ones to be "collateral casualties" of the drug war.
Learn more

ABSENCES, by award winning filmmaker Tatiana Huezo (The Tiniest Place), exposes the ever-intensifying phenomenon of enforced disappearance in Mexico. A boy and his father disappear one morning, snatched off the road by armed men. Left behind, alone with her daughter, Lulu, a victim who refuses to give in, decides to tell the unacceptable story: the unfillable void, the absence of loved ones, the unanswered questions and the suffocating silence. After 5 years, absence has her living in a limbo that gives way to desire, hope and the struggle to find her 9-year old son Brandon and her husband, alive. This hauntingly beautiful short film illuminates the way disappearance affects women, and broadens our awareness on disappearance and its social consequences in Mexico and Central America.
Learn more

THE ROOM OF BONES follows the passage of four mothers in the Institute for Legal Medicine as they search for their children’s remains in the midst of three decades of social violence in El Salvador. Across Mexico and Central America, the last twenty years have been plagued by a meteoric and troubling rise in desaparecidos, or missing persons. Mass murder has become all too common, and the identity of the perpetrators remains unknown as the relationship between governments, gangs, and other criminal organizations is shrouded in mystery. As civil and legal systems have failed to thoroughly investigate the crisis, families of victims are left to seek closure and justice on their own. Salvadoran filmmaker Marcela Zamora profiles a group of forensic anthropologists in her home country tasked with the noble but gruesome work of unearthing human remains and matching them with names of desaparecidos. The result is a harrowing portrait of a region in crisis.
Learn more
Shopping Cart