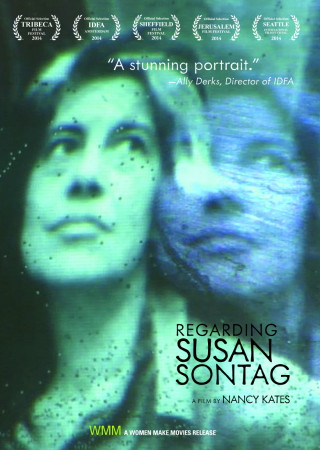 A film by Nancy Kates

REGARDING SUSAN SONTAG is an intimate and nuanced investigation into the life of one of the most influential and provocative thinkers of the 20th century. Endlessly curious, passionate and gracefully outspoken throughout her career, Susan Sontag became one of the most important literary, political and feminist icons of her generation. This beautifully constructed documentary tracks Sontag’s life through evocative experimental images, archival materials, accounts from friends, family, colleagues, and lovers, as well as her own words as read by Patricia Clarkson.

From her early infatuation with books to her first experience in a gay bar; from her early marriage to her 15-year relationship with legendary photographer Annie Leibovitz, REGARDING SUSAN SONTAG is a fascinating look at a towering cultural critic and writer whose works on photography, war, illness, and terrorism continue to resonate today. REGARDING SUSAN SONTAG premiered at the Tribeca Film Festival and was broadcast nationwide on HBO.

"Thorough, intimate, and well-rounded portrait…this well-crafted, informative, and visually appealing biography is recommended to Sontag fans and students of American arts and culture."

"Using interviews from people who were close to her, as well as archival footage and interviews, the film brings Sontag to life on the screen."

"Nancy D. Kates’s profile does well by the early years, critical texts and novels, but gets even further into the writer’s evolving private persona: unsatisfied, unbowed, unapologetic."

"That director Nancy Kates manages to hit so many important pivot points in Sontag’s life and career in a cinematically engaging way feels like a small miracle."

"In Nancy D. Kates' demonstrative documentary, Sontag's highly eloquent and confrontational voice is resurrected, allowing the audience to explore the life of a writer who defied the patriarchal dominance of academia and went on to define her own unique form of social criticism."

“… a fascinating, moving, and often gorgeous entry into the canon of works produced about Sontag since her death..."

"REGARDING SUSAN SONTAG… stood out for the complexity of its portrayal of a difficult character... striking for its nuance, its communication of overlapping meanings."

"REGARDING SUSAN SONTAG is an engaging documentary that presents a complicated, detailed portrait… Archival footage is remarkably excavated and assembled..."

"Fascinating for the details of Sontag’s life as well as for insights into avant-garde mid-twentieth-century lifestyles, this beautifully shot program will intrigue fans of literature and feminism."

Nancy Kates produced and directed the feature-length HBO documentary REGARDING SUSAN SONTAG, which premiered at the 2014 Tribeca Film Festival, where it received a Special Jury Mention. It has since screened at over 130 film festivals in 35 countries, and received several honors, including a FOCAL International Award. REGARDING SUSAN SONTAG received major funding from the NEA, the NEH, Chicken & Egg Pictures, and Sundance. Ms. Magazine named the film one of 2014’s top ten feminist films, while critics called it "compelling" and "perceptive" (NY Times); "a stunning portrait" (Ally Derks, IDFA); and "mesmerizing, thoughtful, provocative" (Times Herald Record), praising its "boldly evocative impressionist strokes" (SF Chronicle). Kates produced and directed BROTHER OUTSIDER: THE LIFE OF BAYARD RUSTIN, with Bennett Singer. The film premiered in competition at the 2003 Sundance Film Festival and on the PBS series "POV," winning more than 25 awards worldwide. Critics described it as "a potent piece of historical rediscovery" (LA Times); "beautifully crafted" (Boston Globe); "powerful and startling" (The Advocate); and "poignant"(TIME). Kates studied documentary film at Stanford; her master’s thesis, THEIR OWN VIETNAM, received the 1995 Student Academy Award. In 2014, she was included in the OUT 100, the magazine’s list of intriguing LGBT Americans. (03/19)

Tillie Olsen: A Heart in Action

This revelatory documentary is an inspiring homage to Tillie Lerner Olsen – a renegade, revolutionary, distinguished fiction and non-fiction writer, feminist, humanist, labor organizer and social activist. Politically active, class conscious, deeply joined to the world, Tillie countered the very core of American writing by immortalizing the lives of working class women and single mothers. Her short stories “Tell Me a Riddle,” and “I Stand Here Ironing,” galvanized the literary world and set in motion an essential new perspective on the lives of ordinary women. Filmmaker Ann Hershey tells not only the story of Olsen as a writer, but also documents her life as an activist. Extended interviews with Olsen during the last years of her life are deftly interspersed with footage from her readings, lectures and book signings as well as with archive materials and comments from notable feminists such as Gloria Steinem and Alice Walker. A perfect companion film in courses covering Olsen’s literature, this documentary is also recommended for women’s studies, labor studies, political studies and American history courses.
Learn more

Who's Afraid of Kathy Acker?

A multi-layered work featuring animation, archival footage and interviews with the likes of William Burroughs, Carolee Schneemann and Richard Hell, Who’s Afraid of Kathy Acker by Austrian artist Barbara Caspar and co-produced by Annette Pisacane (Nico Icon) and Markus Fischer, is a thoughtful and creative film biography/essay on the late outlaw writer and punk icon, whose formally inventive novels, published from the ’70s through the mid-’90s, challenged assumptions about gender roles, sexuality, and the literary canon. A beguiling and intensely contradictory figure, Acker is best known for books which creatively appropriated texts from Great White Male writers, retelling them in an emotionally raw, sexually blunt, and politically questioning female voice. With her conceptual art videos in the ’70s, her close-cropped dyed blond hair, her tattoos, and her piercings, Acker was a performance artist, proto riot grrl, and living link to the transgressive authors of the ’50s and ’60s US and French experimental fiction scenes. Caspar has made a film that captures the essence of both Acker the writer and Acker the person while celebrating the avant-garde legacy of an artist who forever expanded the limits of self-expression. — Scott Macaulay, Filmmaker Magazine
Learn more

In the forefront of early twentieth-century American literature about immigrant women’s lives, Anzia Yezierska’s work includes short fiction, novels, and essays, and her output spans 50 years. SWEATSHOP CINDERELLA, by award-winning filmmaker/historian Suzanne Wasserman, vividly depicts this Jewish immigrant writer’s amazing story. Arriving from Poland around 1890, Yezierska’s family settled on the Lower East Side, where she toiled in sweatshops and laundries, studying English at night. Defying her parents, she pursued her education and became a teacher. Twice married and divorced, she also had a daughter. At the urging of philosopher John Dewey, with whom she fell in and out of love, Yezierska devoted herself full-time to writing stories and novels in Yiddish-English dialect that won awards and rave reviews. Soon Hollywood, which turned two of her works into movies, beckoned her to write screenplays. When disenchantment with that world set in, she returned to New York, writing and publishing her best work between 1922 and 1950. Using archival stills and footage, silent film excerpts, letters, newspaper clippings, and interviews, this is a major contribution to our understanding and appreciation of Yezierska and her work.
Learn more

She remains the most famous woman poet of the Beat Generation; her friend Allen Ginsberg called her “heroic in life and poetics.” THE POETRY DEAL is an impressionistic documentary about legendary poet Diane di Prima. Still actively writing in her late 70s in San Francisco, where she is poet laureate, di Prima is fierce, funny and philosophical. She is a pioneer who broke boundaries of class and gender to publish her writing, and THE POETRY DEAL opens a window looking back through more than 50 years of poetry, activism, and cultural change, providing a unique women’s perspective of the Beat movement. Much of the story is told through di Prima’s recorded readings, including a deeply moving reading of her unpublished poem The Poetry Deal, reflecting on her relationship with her art. Essential for women’s studies, poetry studies, women’s history courses and more, THE POETRY DEAL puts di Prima’s life and work on screen in a unique, beautiful portrait using rare archival footage, impressionistic scenes and powerful stories told by friends and colleagues.
Learn more

Photographer Suzy Lake is one of the formative feminist artists to evolve out of the heyday of the 1960’s and the Second Wave. A master of the art of self-portraiture, Lake influenced Cindy Sherman as well as a host of other female artists. Lake makes art that address politics, gender, youth, beauty and aging while reflecting on her own journey through time. SUZY LAKE: PLAYING WITH TIME tells the story of how much has changed in the worlds of feminism and art, and yet how much things remain the same. Filming for almost 4 years, filmmaker Annette Mangaard weaves a powerful portrait of the complex artist by juxtaposing powerful archival footage, still photography and interviews with Lucy Lippard, Mary Beth Edelson and Martha Wilson among others. SUZY LAKE: PLAYING WITH TIME delves into Lake’s legacy as she continues to explore the politics of gender with work that deals with the aging woman, countering notions of consumer beauty with a different and real image, celebrating stamina, maturity and experience. An essential companion piece to any discussion on the Second Wave, feminism and art.
Learn more

Violette Leduc: In Pursuit of Love

The French author and memoirist Violette Leduc was a controversial pioneer. Her taboo-breaking memoir, La Bâtard, (The Bastard), became an enormous literary success. Through her work, she confronted the experience of being an illegitimate child, homosexuality, abortion, and explored with intensity and total candor the reaches of female desire – all scandalous, indecent subjects for macho 1950s France. A contemporary of Sartre, Cocteau and Genet and published by Albert Camus, she was encouraged to write by Simone de Beauvoir, whom Leduc was in love with. De Beauvoir secretly awarded her a pension for 15 years until Leduc had her own successful following. After decades of toiling in obscurity, Leduc would go on to publish the lesbian classic Thérèse and Isabelle. Director Esther Hoffenberg uses rare archival footage of Leduc, interviews with friends and scholars, and the author’s own words to rediscover the impact of Leduc’s work and sketch the controversial woman behind them and one of lesbian literature’s giants.
Learn more